Dochy Farm, which had become a German strong point, was taken by the 2nd/5th Bn. Lincolnshire Regiment on 26 September 1917, in the Battle of Polygon Wood. The cemetery was made after the Armistice when isolated graves were brought in from the battlefields of Boesinghe, St. Julien, Frezenberg and Passchendaele. The cemetery now contains 1,439 burials and commemorations of the First World War. 958 of the burials are unidentified but special memorials commemorate two casualties believed to be buried among them. The cemetery was designed by Sir Reginald Blomfield.

Unknown New Zealanders in this area are on the Memorial for the Missing on Tyne Cot Cemetery. We know their name but don’t know where they are buried. With historical research it is sometimes possible to link a grave in a cemetery who is partially known (e.g. nationality, rank, etc.) to a name on that memorial. Not everyone on the Memorial of the Missing has an unknown soldiers grave on a cemetery, some are still buried in the (battle)fields. This is especially the case in areas where there was fierce fighting and there was no or little possibility to recover the death. Some have been exposed to nature without burial during several months, sometimes more than a year.

On the map following this paragraph you can see the places where the different New Zealand regiments attacked during the Battle of Broodseinde on 4 Oct 1917.
3rd Auckland was the first wave to take the red line, 3rd Canterbury the second wave to take the blue line on the right hand side of the NZ sector.

Dochy Farm was on the jump-off line for the New Zealand Division on 4 Oct 1917.

It is well known that the New Zealand Divisions sector - who was the largest sector of all the assault troops -was extended to the left because there was a gap where the 48th British Division had to be. Mainly 1st Auckland Battalion was in the 48th Division area and attacked Winzig.

The Stroombeek stream is the same as the Ravebeek stream, the name is different in Langemark and in Passchendaele for the same brook. The area north-east of the blue line was attacked on the 9th of Oct 1917 by the 49th British Division and on 12 Oct by the New Zealand Division again (but the 3rd and 2nd Brigade instead of the 1st and 4th Brigade on the 4th of Oct).

I.E.20 is the grave reference on Dochy Farm Cemetery.

The Unknown NZEF Captain has been found on position D8 a 00.15, same place as Sgt Donald McLean who is buried at I.E.13. Sgt McLean was in the 1st Battalion Auckland regiment. This was already done on 15 October 1919.
Also Quinlan George Thomas, killed on 4 October 1917, was in the same battalion and is buried in the same row as the Unknown Captain and Sgt McLean (at I.E.3). he has been found on position D8 a 90.10.

A picture of the Burial Return Sheet is following this paragraph. Please remark that next to the gravestone of the unknown captain there is an unknown soldier of the Royal Warwickshire Regiment, so the headstone of this soldier has been changed from place (should be number 18 according BRS and is 19).

Extract from the official history of the Auckland Regiment (in italic)

04/10/1917
1/Auckland, occupying the ground round Cluster-Houses, were lying very close to the enemy strong points at Winzig and Aviatik Farm, from whence came a considerable volume of machine-gun fire, which caused many casualties throughout the night.

During the night of the 5/6th the Battalions were relieved and went back, 1/Auckland to Salvation Corner and the 2nd and 3rd Battalions to Goldfish Chateau.

Because of this extract, together with the reburial of McLean and Quinlan I believe that Capt Parry is a very good candidate to be the Unknown Captain on Dochy Farm New British Cemetery.
According to this regimental history he has been killed on the 4th of October and NOT at the 6th as is stated in the CWGC database and the Auckland Cenotaph. It was even almost impossible because the Battalion moved during the night of the 5/6th  away from the battlefield.
Both Captain Parry and Sgt McLean have possible been killed on the 4th of October 1917 instead of the 6th when trying to capture the Winzig strong point is my idea.
However, the exact date of death is less important as the possible rededication of an unknown grave.

What happens with the Missing, the Unknown Captains?

We have done research on all six Missing Captains.

Capt Bowler Daniël, who is from the 3rd (Rifle) Brigade (2nd Bn) has been on the battlefield on the 12th   and was in the first wave with his Bn who attacked Belle Vue Spur between the Blue Line (map 1) and Belle Vue Spur. He was not around that blue spot (map 2) that morning. He was CO of D Company (Cy) in the 2nd Bn Rifle Brigade and he was following from left to right C, B and A Cy in the first wave against Belle Vue Spur. He was killed in action where he fought and there is no trace that he has been buried. His body has been lost. The grave of the unknown Captain is more than 1 km from the place where he was.

Captain Gillett Lawrence was in the 3rd Bn Auckland, has been buried at Bank Farm left corner of the map on map 2. He died before the attack of 4 October (on 2 October), so the area where the unknown Captain was buried was not even captured.

Captain Hubbard Arthur Charles was in 2nd Bn Auckland and in the second wave of the attack on 4 October - on the right hand side sector of the 1st Brigade (following 1st Bn Wellington) between Korek and the Blue Line (map 1). He would not have been brought to the area where the Unknown Captain of Dochy Farm Cemetery has been found and it was not even on the medical evacuation road. He was also KIA more than 1 km from the place the unknown captain was buried. Dave Galla(g)her the famous captain of the All Black 1905 Originals was in the same Battalion (Bn).

Captain Keir John was in 1st Bn Wellington and was buried near Waterloo Farm on 23 October 1917.He would not have been brought over to the blue spot (in a second field grave) on map 2.

Captain O’Callaghan Leslie was in the 1st Canterbury Bn who was there on 12 Oct between the Blue line on the map on page 4 and (or short over) the Ravebeek stream. There is no reason (and no possibility) why he should have been brought to the blue spot - on the map 2 - to be buried. He was one of the officers from the Bn who have been killed that day (together with LtCol King, CO of 1st Bn Canterbury) around the Ravebeek stream trying to capture Belle Vue Spur. There was a RAP and cemetery at Waterloo Farm and a RAP at Abraham Heights (right hand side of ‘s Graventafel looking towards Passchendaele). Also here the blue spot - on map 2 - was not on the evacuation road. Only the wounded could be evacuated after that battle, two days were necessary to evacuate every wounded man from the battlefield to the RAP and the last man leaving Spree Farm (stretcher bearer relay post) was on the 16th of October, there were no hands to evacuate the death. Everyone was needed to evacuate the wounded from the battlefields.


According to the regimental history of the Auckland Regiment, Captain Parry Ernest was around that blue spot and died on the 4th of October. Another Soldier of the same regiment/battalion and company (Sgt Donald McLean) was buried at the same spot during the war (see Burial Return Sheet) and they are both in the same row on Dochy Farm New British Cemetery.

Because all the other possible Captains who are missing in Belgium in October in Passchendaele have not been buried on the blue spot (and have not been in the vicinity of this spot who was out of the NZ sector), it could only be Captain Ernest Parry. He was in the 1st Auckland Bn who was in the first wave and who was going over the Army Boundery in the direction of Winzig as CO of the 16th Waikato Cy

I suggest the gravestone of McLean should read 4 Oct instead of 6 Oct and the Unknown Captain should be Captain Ernest Parry, KIA 4 October 1917.

This research has been send to the NZ Embassy on 30/07/2020 who send it to the CWGC. Maybe they send it also to Wellington NZ. On 21/08/2020 I’ve got an answer from the CWGC that the submission has been rejected and the report send to the New Zealand Defence Force (NZDF) for further examination. On April 2 2021, I had an e-mail from the NZ Embassy with a letter from NZDF to thank me for the research and to say the submission was accepted.

The NZDF had found more evidence: an article from the Ohinemuri Gazette and an extract from the diary of the CO of the Battalion saying Captain Parry was killed the 6th at 1 am. The article gives evidence that Captain Parry died together with the sergeant when they came out the line.

Sgt McLean was the only sergeant who died on the battlefield that day (Sgt Paine died also on the 6th but was wounded on  4 October 1917 (shrapnel wound abdominal) and admitted 3 New Zealand Field Ambulance the same day. Transferred to 44 Casualty Clearing Station 4 October where he died of wounds on 6 October 1917.

The NZDF could also trace relatives of Captain Parry and Sgt McLean.

At the end of this article you can see the two extracts from NZDF.

There will be a rededication of the gravestone but due to the covid measures all rededication ceremonies are postponed until it is safe to organise them.

NZDF made a contribution for  NZ TV 1 – 7 Sharp an extract can be seen here: https://www.youtube.com/watch?v=vG8CWAet8dc 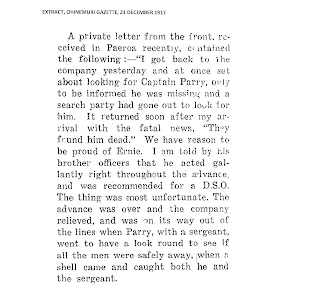