My father, Sapper Bill Young of the NZEF Signallers Corps, survived the Great War and service in WW2, but died when I was only nine.

I remember my parents talking about the Great War and sometimes about their friend Don Hosie, when I was very young (in the fifties). Their conversation might go like this…..

“Don Hosie was very tall and handsome - it was terrible that he was killed in the Great War….

He and my father went everywhere together – (they attended Kaikorai Primary School, the Dunedin Art School and went to the Kaikorai Presbyterian Church and Bible Class”.

“Don Hosie was a bit older than my father and went to the war some months before him and was killed there. 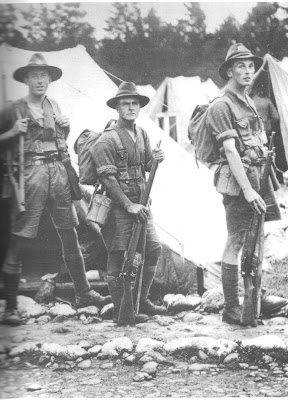 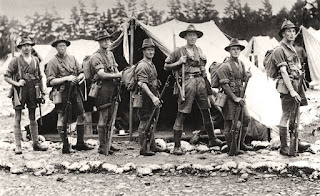 It is only relatively recently I read Don Hosie was also an architect and had won a national competition with his design for the Sargeant Gallery in Whanganui, when he was only 21.

It is a sad story.

The Sargeant Gallery website details the story of how Don Hosie’s Dunedin employer Edmund Anscombe, claimed credit for the winning design, (entry number 16).
An enquiry was held at the time, by Hurst Seagar, (the adjudicator of the architectural competition for the design of the Sargeant Gallery), during which the young Don Hosie refused to testify against his employer: the epitome of what was considered manly and honourable behaviour at that time.
Don Hosie said he believed he would have other opportunities after the war.
Behind the scenes Hurst Seager had heard that the winning design was not in fact by Anscombe, but by his articled pupil, Donald Hosie, who was only 21 years old. Over a period of a few days there was much to-ing and fro-ing of telegrams between Hurst Seager and Anscombe in an attempt to clarify who in fact was the designer of entry number 16, but clarity did not eventuate.
Anscombe said only that the design had come from his office.
Seager resolved to visit Dunedin to interview all parties.

Seager arrived in Dunedin on 25 October and called together the Otago branch of the
New Zealand Institute of Architects, which included G W Gough [chair], E W Walden, P Y
Wales and J Barton. Together they conducted interviews to ascertain the author of design
number 16. The committee duly reported that they ‘held four meetings and obtained what
evidence was possible under the circumstances. Owing to the extreme loyalty of Mr Hosie
to his Principal [which we heartily appreciate] we were unable to obtain from him a clear
statement of facts necessary to make the enquiry conclusive. Especially do we regret that
Mr Hosie felt compelled to refuse to answer very important questions relating to matters
of fact before he had had an opportunity of conferring with his Principal and Lawyer.’

Hosie’s reluctance to state categorically that he had been the author of the design because
he was an articled pupil, left Hurst Seager in a difficult position, especially as Anscombe
was eager to be regarded as the architect for the project.

Seager summarised Hosie’s position thus: ‘his feelings were that he was a young man and
would have his chance again, and he would rather that his name was not mentioned at all
and to let Anscombe have the credit. He did not like to feel that Anscombe should have
a chance of saying that he, Hosie, had not played the game while a pupil.’

Another complicating factor was that Hosie had been called up for army training and
service in WWI. Hurst Seager said of Hosie ‘that he is I understand, a fine manly type of
young fellow who is anxious to go to war, but although all other architects have allowed
their pupils to cancel their indentures, I understand that Mr Anscombe refused to allow Mr
Hosie to do so.’

The Mayor of Whanganui intervened (perhaps to solve embarrassment with the Whanganui Council) for Don Hosie to be held back from going to war until he had completed the working drawings. Don Hosie completed the drawings before he sailed for Europe in March 14 1917 on the Ruapehu.

His employer Edmund Anscombe ensured that Anscombe Architects was employed to oversee the construction the Sargeant Gallery, according to the design of Don Hosie.

Don Hosie became a corporal in the Otago Regiment 2 Battalion (23rd Reinforcements), and on March 14 1917, left New Zealand for the battlefields of Europe.

The foundation stone for the Sargeant Gallery, was laid in September 1917,
just three weeks before Don Hosie was killed in action, along with 845 other young New Zealand men, attempting to cross shell holes of mud and uncut barbed wire, in the face of unremitting machine gun fire from the Germans positioned on top of Bellevue Spur, and amongst shells falling from both sides. This was within the first two hours of the Battle of Passchendaele October 12th 1917.

Corporal Don Hosie aged 22 years, was buried at Passchendaele New British Cemetery on the road to Passchendaele just past S’Gravenstafl, on Bellevue Spur, very close to where he fell.
Almost a century later, on a cold, wet and bleak day, in 2012, I visited his grave.  I wondered if any of his family from Otago on the other side of the world, had ever had the opportunity to visit. 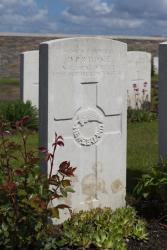 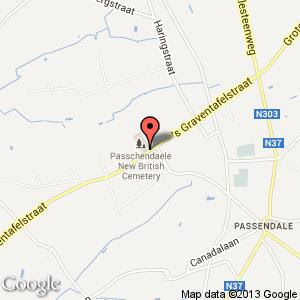 We could find this spot thanks to the Burial Return Sheet of the CWGC.