It was a freewheeling idea from Roger Dungan, a passionate cyclist from the NZ Embassy in Paris. He asked for help and the NZ Defence Attaché, Navy Captain Shaun Fogarty, brought us into the team.

In the meantime Roger had contact with the directors of the Belgian Gent-Wevelgem organisation who were very interested in the story of the NZ Cyclist Corps.
Roger knew about the cobblestones in Flanders and the cobblestone as a trophy in the Paris-Roubaix race.
He was also aware of the fact that some New Zealand cyclists are competing in Belgium.
It was his idea to present a Mt Kemmel cobblestone to the Under-23 (year) cyclists in New Zealand as a trophy.

The New Zealand Cyclist Corps came to the war as part of II ANZAC, the Australian and New Zealand Army Corps.
An Army Corps was a military unit that consisted of four Divisions; one of those was the New Zealand Division.

The Cyclist Corps soldiers were part of II ANZAC but not

of the New Zealand Division.

They were mostly used as reconnaissance troops, like the mounted rifles, and also to move quickly to places where soldiers were needed. They worked everywhere II ANZAC was.

In early 1918 the New Zealand Division moved to France but II ANZAC was still in Belgium and was deployed during the Spring Offensive in and around Kemmel (Heuvelland).

On 13 April 1918 two companies of the NZ Cyclists were ordered to establish a defence line on its south-eastern slopes.
On 14 April the Germans’ successful advance on Nieuwkerke saw the cyclists reinforced by infantry retreating from this battle. The cyclists stayed in this line until 18 April when they were relieved by a French cavalry unit.
During this time they were shelled by the Germans and suffered a number of casualties.
On 18 April they took up a new position at nearby Vierstraat, about 7 km south-west of Ypres and on 25 April they were instructed to help fill a gap in the frontline there.

During these actions the cyclists suffered over 100 casualties, including 16 New Zealanders killed (90 bikes were destroyed by enemy shelling).
Twelve NZ cyclists were awarded the Military Medal for their gallantry during the Kemmel / Vierstraat actions – including Sergeant F. C. Matthews, who was killed at Marfaux three months later.
In total 63 cyclists were killed; 21 in Belgium, 38 in France, 2 died in New zealand and 2 in the UK. Lt. Colin Adison Dickeson MC died on 26 April  1918 and is buried on Lijssenthoek Military Cemetery. Six are on the Messines Ridge Memorial and four are on Buttes New British Cemetery Memorial, all disappeared during the period at Kemmel/Vierstraat and are buried as an Unknown Solier or are still in the fields around this place. There is about 50% they are still in the fields.

We worked together with the Mayor of Heuvelland, Gent-Wevelgem, the NZ embassies in Belgium and France, NZDF and the NZDF Maori Cultural Group , Ngati Ranana and the town of Zonnebeke/Passchendaele. 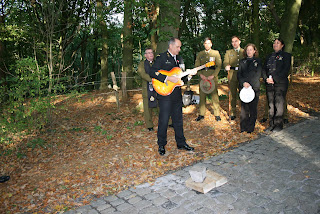 The cobblestone came from Mount Kemmel, an iconic place in Belgium for cyclists. The NZCC certainly passed over that road. The cobblestone was placed on a piece of wood from a dugout beneath the Zonnebeke church that has been opened for the duration of the centennial of the Battle of Passchendaele during 103 days. This is a real artefact, more than 100 years old, from a WWI dugout.

The trophy was presented to New Zealand on the evening of November 9 at an event in Heule/Kortrijk. It was handed over to the New Zealand Ambassador Gregory Andrews and the well-known New Zealand cyclist Jack Bauer.
Ngati Ranana members blessed the art-work before it left Belgium for its trip to New Zealand.
They also performed a haka to thank the organisers and all involved for such a great work in honouring and commemorating the New Zealand Cyclist Corps. The pictures you are seeing are from October 2017 when the cobblestone has been taken from Mt. Kemmel and has been blessed by the NZDF Maori Cultural Group.


You can read more (in Dutch) and see a picture of the handing over from H.E. Gregory Andrews to Jack Bauer: http://www.gent-wevelgem.be/nl/voorstelling-80ste-editie
you can see a film about it here: ytgent_wevelgem