ANZAC Tunnelers in Belgium from 1916 on 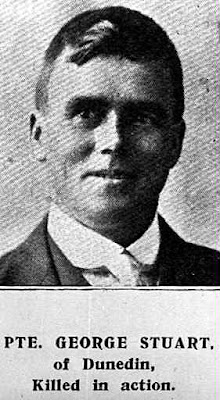 Next month,  on the 25th of  April it will be ANZAC day and it will be commemorated all over the world by a lot of Australians and New Zealanders. Also here at the Western Front, there are some commemoration events for both countries. We thought it would be worth to tell another ANZAC story that, as far as I know, never has been published before.

George Stuart from Dunedin in Otago New Zealand was in the 1st Canterbury Bn. He died on 24 September 1916 age 25 and is buried in Belgium at TANCREZ FARM CEMETERY at Ploegsteert (Comines-Warneton). There are three New Zealanders buried there.

Benjamin Herbert Needs from Alma Oamaru Otago New Zealand was in the 1st Otago Bn. He died on 15 November 1916 age 22 and is also buried in Belgium at RAILWAY DUGOUTS BURIAL GROUND (TRANSPORT FARM) at Zillebeke (Ypres). He is the only New Zealander on this cemetery.

Of course, the New Zealand Division came into Belgium only in 1917 and they left Flanders again in 1918. In total three New Zealanders are buried in Belgium in 1916. What happened and how is this possible?

The first to be buried in Belgium was William John Mitchell from Cromwell in Otago New Zealand who served in the 2nd Bn Otago. He died on 01/07/1916 age 20 and is buried at LIJSSENTHOEK MILITARY CEMETERY in Poperinge. He was with his unit in Houplines just over the border in France and was badly wounded. He was transported with N° 4 Ambulance Train to Poperinge where there was a Casualty Clearing Station, unfortunately, he died underway.
He was wounded on the 30th, the day they did a gas attack against the enemy lines and also the day that there was a bombardment from the Germans. We really don’t know what kind of wounds he had, it could be from the bombardment of the Germans but also from their own gas cylinders. It is at high risk to install cylinders with gas for an attack the following day knowing that the enemy could shell the area and so destroy your own gas containers!

The two other New Zealanders were part of (detached from their unit) the 1st Australian Tunnelling Company and worked with those Tunnellers in Belgium when they died.
George Stuart was at Hill 63, this is at the Catacombs in Ploegsteert (AKA Plugsteert) Wood. According to his file, he was KIA but I suppose he was wounded and brought over to Tancrez Farm (Cemetery) because there was an aid post at this place.
Benjamin Needs was at Hill 60, the Australian 1st Tunnelling Company took it over from the Canadians early November 1916. Hill 60 is very well known from the Australian film with the same name and for the Caterpillar and Hill 60 mine craters, two of the 19 mines who were fired on the 7th  June 1917. Hill 60 is also one of the main sites in Flanders to visit when on pilgrimage at the Western Front. Hill 60 and the underground work of the miners was not only a very secret part of the war but also a very cruel and devastating place.

As this story is telling you, New Zealanders and  Australians have been mixed not only in the ANZAC Corps as two different Nations but there was also an exchange of people between the different Nations of the Commonwealth.
- March 12, 2019 1 comment: Links to this post