On 5 February 2019 at 5 pm we had a commemoration event at New Irish Farm Cemetery in Ieper/Ypres for Kiro Luke ADAM (born Atamu) from Rarotonga, a member of the Māori Pioneer Battalion during WWI.

In the early 1900’s Kiro Luke ADAM sailed from Rarotonga, Cook Islands to work as a gardener in Parnell, Auckland. He was the youngest of two brothers and two sisters.
He enlisted to go to war on the 1st July 1915 in Takapuna and his declared age at that time was 21 years old. He was 1,70 m and his weight was about 75 kg. His military record (one sheet) gives 1 June 1893 as the date of birth. In that case, he was 22 years old.
He joined the 2nd Māori Contingent. They departed New Zealand for Suez on 19 September 1915 on board of the ship Waitemata. In his military record, it appears that Kiro was attached to the 2nd Auckland Infantry Battalion on 19 Jan 1916 in Moascar, Ismailia.
On 20 February when the NZ Pioneer Battalion was authorized he became an NZ Pioneer.
On the 9th of April, he sailed from Port Said to France on board of the Canada, altogether 28 officers and 948 other ranks who arrived in Marseilles on 14 April 1916. On the 15th and 16th they were transported by train to Steenbecque, Northern France and marched into a small village known as Morbecque.
On the 17th they moved again to Sercus and later that month the NZ Pioneers were split to different places and different work. On May 15, 1916 the Battalion moved to Armentieres.

D Company of the NZ Pioneer Battalion to consist of Cook Islanders only attended to the sawmill work, concrete works and R.E. dumps for the next 2-3 months.

On 8 August 1916 Private Kiro Luke ADAM was appointed a Battalion Bomber – a specialist in hand grenade throwing. Mid-August the Pioneers moved away from the trenches in Armentieres to the Somme in the Longueval area. Mid-October they went back to the Armentieres sector.
Early 1917 there was a reorganization and Kiro would probably be no longer in D company. From 15 February on, Māori pioneers have been in Belgium. Most of the time until the summer they have been around the Messines area in preparation of the big attack, known as the Battle of the Mines, on the 7th of June. At the end of June they went to Vieux-Berquin, just over the border in France to rest.
From the 3rd of July on, they came back in Flanders/Belgium in different areas for the next two months.
End of September, the Māori Pioneer Battalion came to Ypres and the St. Julian / Passchendaele sector to prepare the area prior to the involvement of the New Zealand Division in the Battle of Passchendaele.
The Battle of Broodseinde was fought as part of Third Ypres on 4 October 1917 by the New Zealanders who took ‘s Graventafel and opened up the way to Passchendaele.
On the 4th of October, the German shelling was not heavy west of Kansas Cross, and at 11 a.m. B and later A Company Pioneers commenced repairs on the road forward to Kansas Cross. The Pioneers did excellent work on the roads and artillery tracks, but wet weather on the 6th and several days afterward, and the trains of pack mules along the newly formed earth road turned it into a quagmire. For several days it was a steady fight with mud. Guns and horses were bogged everywhere. The Māori Pioneers pulled many guns out and into position but the road was in a fearful condition.
After the Battle of Broodseinde the Māori Pioneer  Battalion took over the road as far as Spree Farm, and with practically no material they had to make the road forward passable for guns.
No further attempt could be made to push forward the tram lines owing to the lack of material. Even had this been available the congested state of traffic on the road from Ypres to the Steenbeek brook made it almost impossible to get wagons with material forward.
The Pioneers did what they could do; making plank roads, dug board tracks, etc.… in the direction of Passchendaele because on the 9th October the British 49th Division had to attack and later on the 12th  Oct the New Zealand Division had to attack again. Guns had to be brought forward, supplies, ammunition, and men.
They were working around the road from Spree Farm to Kansas Cross and ‘s Graventafel and the frontline was about 400 yards over ‘s Graventafel in the direction of Passchendaele between Waterloo Farm and Fleet Cott
Sadly private Kiro Luke ADAM was killed in action on Sunday 7 October 1917 in between Spree Farm and Kansas Cross. His body has been buried in a field grave. This means that he was killed instantly. Otherwise, he should have been brought to the aid post at Schuler Galleries, near Schuler Farm (only 200 yards) or to the Advanced Dressing Station at Wieltje (3 km). The same day a Fiji Islander, Joseph Curtis was wounded and brought over to the Can. Casualty Clearing Station at Poperinge but eventually he died on the 8th and is buried there.
There was always shelling and bombarding in between the battles. The front line was about 1200-1500 yards north-east of the place where Kiro Adam has been buried. Probably he has been buried where he was killed. On the right-hand side of the road, south of Pond Farm.
After the war, in 1920, his remains have been removed from his field grave by the exhumation units to New Irish Farm Cemetery in St Jean (now part of Ypres).

By the end of the war; almost 2,500 Māori and about 500 Pacific Islanders had served in the Māori (Pioneer) Battalion. Of these, about 350 died on active service and about 750 were wounded. 79 men from the Māori Pioneer Battalion are buried in Belgium.
Māori also enlisted (and died) in other units of the New Zealand Expeditionary Force but also in other units of the Commonwealth Forces.

In April 2017 his grave has been visited by the Queens Representative of Cook Island, His Excellency Sir Tom Marsters and Lady Tuaine. 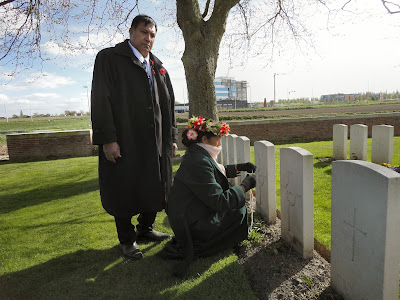 Only one of the 11 Cook Islanders who died during the Great War is buried in Belgium.
Sir Tom and Lady Tuaine did a battlefield tour in Northern France and Flanders/Belgium and they have been at the Menin Gate for the daily Last Post Ceremony to lay a wreath on behalf of the People of Cook Islands.
(c) Freddy Declerck MNZM OAM
- February 05, 2019 No comments: Links to this post