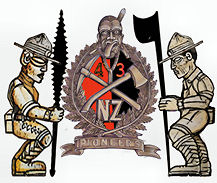 During two days, the New Zealand Pilgrimage Trust was hosting a special group New Zealanders and Cook Islanders. Sue Baker-Wilson, QSM was the first to contact us and it was a fantastic idea to extend the visit to Northern France and Belgium.

Most of the group are descendants of soldiers who fought in the Maori Pioneer Battalion. Pioneers were working with the engineers and did hard labour under very difficult conditions (bad weather, shelling, gas,...). They made trenches, plank roads, dugouts, shelters, duckboard tracks, and many more work, some have been used as foresters and 43 members of the Maori Pioneer Battalion have been in Arras to dig the tunnels prior to the Battle of Arras. Some of them have signed their work  in the tunnels of Arras. The descendants of those 43 made a group known as the “Kia Maumahara Māori Pioneers -Forgotten 43 “. They have been the guests of honour in Arras and they could descent in the tunnels made by their forebears. Three of those tunnelers are buried in Belgium because they have been killed here later in the war.

The Forgotten 43 are the only known group of Pioneer descendants to travel together for the WW1 commemorations. As such, they are also be paying their respects and acknowledging all NZ (Maori Pioneers), not just their own loved ones.


Not only Maori people were part of the Maori Pioneer Battalion but also people from the Pacific Islands as Cook Island. This was a reason for the Queens Representative of Cook Island, His Excellency Tom Marsters and Lady Tuaine to come over and pay their respect to their forebears. Only one of the 11 Cook Islanders who died during the Great War is buried in Belgium.
But H.E. Tom Marsters would do a pilgrimage to all the graves and Memorials for his ancestors and also pay his respect to the Maori Pioneers who died on the Western Front because they were all Comrades in Arms during WWI. They were accompanied by Mrs Moeroa Hobbs and Mr. Anthony Brown.


We started Monday morning in Armentieres  and visited different cemeteries and graves with a group of about 30 persons.

In the evening the group was hosted by the Last Post Association together with 2,000 Canadians who were here for the Battle of Arras and the Battle of Vimy.

H.E. Tom Marsters and Lady Tuaine were laying a wreath together with the New Zealand Ambassador to Belgium H.E. Gregory Andrews. Different Maori and Cook Island families did the same. 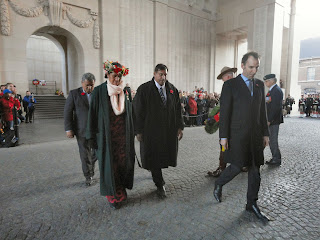 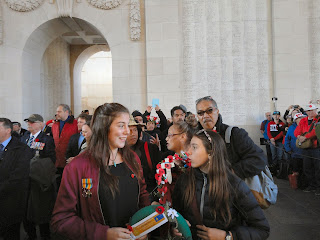 On Tuesday we could continue our visits and we started with Ramparts Cemetery in Ypres/Ieper where some Pioneers are buried. Amongst them 6 young Maori who have been killed by shell fire on 31 December 1917 while doing road works on the road to Zonnebeke. Then we moved to Passchendaele and visited the New Zealand sector, ‘s Graventafel, Belle Vue Spur and a small exhibition about the involvement of New Zealand during WWI in the Old Cheese Factory. Of course we visited also Tyne Cot Cemetery because there is also a Maori Pioneer Battalion soldier, Jack Hunter,  buried who was killed in the Battle of Passchendaele and originally has been buried at Schuler Galleries.

We went also to Polygon Wood to visit the New Zealand graves and for the Memorial for the Missing New Zealanders but also to learn about the work of the Maori Battalion during the winter of 1917-1918. The visit to the New Zealand bunkers in the wood was also a highlight. We ended this day in Heuvelland and visited the Pool of Peace, a WWI crater from the Battle of Messines and a small cemetery near the Seule where we visited the grave of a family member of my contact person in the group of the Forgotten 43, Elanar (Maria) Tibble.
It was a huge honour and at the same time a real pleasure to be with the group and share our common history and learn a lot about other cultures. It was very moving to see that some graves were visited for the first time by a member of the family and to see how they respectful visited the other graves on the cemeteries.