On 24/03/2017 we've got the visit of a parliamentary delegation from New Zealand.
MP Annette KING, MP Melissa LEE and MP Tracey MARTIN have been in Brussels for meetings with the European Union. They had a half a day off and they decided to come to the battlefields to honour their Forebears who have been here 100 years ago.
They had the company of the New Zealand Ambassador to Belgium, H.E. Gregory Andrew and the Defence Attaché RNZN Captain Shaun Fogarty MNZM. A Belgian MP of the European Parliament, MP Tom Vandenkendelaere came to Passchendaele to pay his respect for the New Zealand victims. 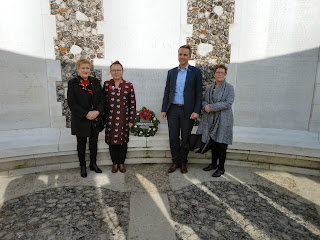 MP Tracey Martin has four relatives who fought on the Western Front. Arnold Wells is on the Memorial in Messines, Samuel King was badly wounded in Polygon Wood end November 1917 (after being gassed in July and a gunshot wound in August) and died exactly one year later at home, Ralph Ansol died in October 1918 in the battle of Lesdain and is buried in Naves communal cemetery extension and in the same place his brother Frederick was wounded.

In Messines they visited Messines Ridge Cemetery and the Memorials, also the Memorial for the New Zealand Soldier on the Market place (known as Sgt Kiwi)). 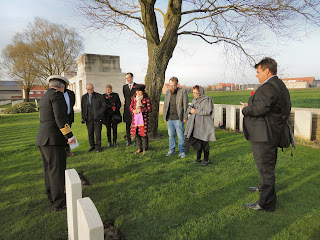 A special visit was planned to St. Quentin Cabaret Military Cemetery where 11 New Zealand Soldiers are buried who have been killed on 24/03/1917, exactly 100 years ago.


At 4 o'clock on the morning of March 24th the enemy opened a terrific bombardment over the left of the sector occupied by the 2nd Battalion of the Regiment, the full force of his fire being directed over the locality extending from Spring Walk to the Wulverghem-Wytschaete Road and beyond, across Slush Gap and into the neighbouring Division's sector. The bombardment opened with heavy minenwerfer fire, followed by high explosive shell and shrapnel. The S.O.S. call was immediately sent to the 1st Field Battery by the officer on trench duty. Shortly afterwards the wire to the 15th Howitzer Battery and the direct wire to the Artillery Brigade were cut by the heavy shelling. Our artillery retaliation, however, was prompt in reply to the first call, and being on the correct sector gave immediate support to our infantry. About five minutes after the opening of the bombardment numbers of Germans moving in two lines in single file and estimated in strength at about 80, were observed advancing across No Man's Land. Our Lewis guns at once opened fire on them, and it appeared as if the attack might be beaten off. The enemy, however, succeeded in entering our front line between Durham Road and Northumberland Avenue, and penetrated to a depth of about 100 yards. They were finally driven out by our Lewis gunners and bombers, who displayed great gallantry under a most intense bombardment. Between 5 and 5.10 a.m. the bombardment slackened off and a few minutes later ceased. Our casualties were 12 killed, 21 wounded, and one missing, believed buried. Three members of the Lewis gun crew of the left post were killed and one wounded, and the remaining man stuck to his post to the last. 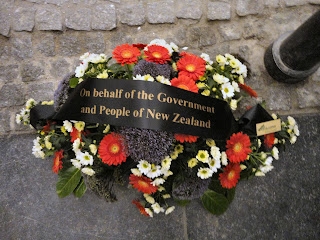 After this visit it was time to go to Ieper/Ypres for the Last Post ceremony under the Menin Gate.


After the ceremony they returned to Brussels.