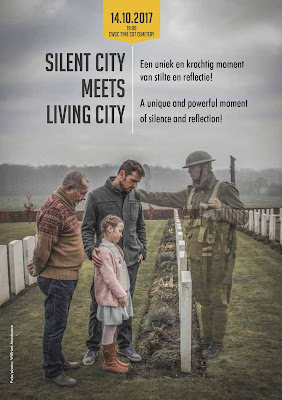 Different people from different countries will be here around 12 October to remember the sacrifice of the New Zealanders in the First Battle of Passchendaele, but also in the Battle of Broodseinde and even the Winter of 1917-1918 with the Battle of Polderhoek Chateau. New Zealand officials and the community of Zonnebeke wil have commemoration events during this period. If you have the intention to be here in this vicinity around 14 October you're more than welcome to participate this special event. We do expect to have 12,000 people visiting the 12,000 gravestones. on Tyne Cot Cemetery. You can be one of those 12,000. Of course we will not forget the approx 35,000 names on the Wall of the Missing and the names in the New Zealand Apse for the Missing.
Don't forget to register for this event, you need to be registered and you can come as an individual or as a group. register here: http://passchendaele2017.org/en/evenementen/silent-city-meets-living-city/ 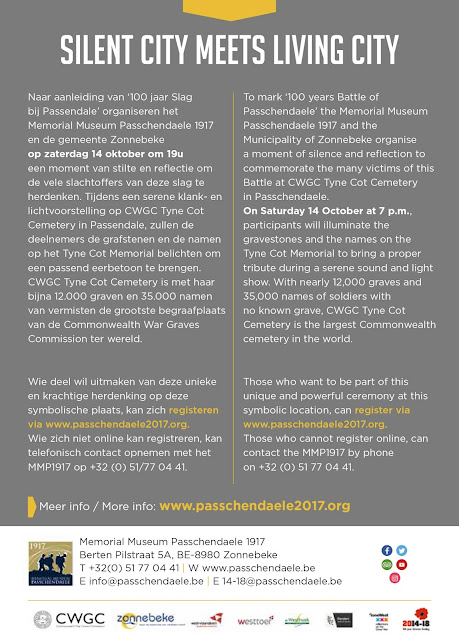 
On Wednesday 11 January, the Prime Minister of New Zealand, the Right Honourable Bill English accompanied by his wife, Doctor Mary English, and staff from his office was visiting different significant places in the history of the New Zealanders involved in WWI. Also the Minister for Trade the Honourable Todd McClay was with him.
Ambassador Greg Andrews was with his staff from the Brussels NZ Embassy with the Prime Ministers delegation.

The Prime Minister paid his respect to his forebears at Berks Cemetery Extension in Ploegsteert (Comines-Warneton/Komen-Waasten), the NZ Battlefield Memorial in Messines/Mesen, the Menin Gate in Ieper/Ypres and at the Memorial for the Missing New Zealanders on Tyne Cot Cemetery in Zonnebeke/Passchendaele.

This visit was not scheduled but because there was a free afternoon in between the different meetings they decided to do as much as possible to follow the trail of the New Zealand Soldiers during WWI in Belgium. In Comines-Warneton the delegation was welcomed by the Mayor Marie-Eve Desbuquoit and François Maekelberg – Président de l'Entente des Associations Patriotiques de Comines-Warneton (local RSA equivalent).

Under the Menin Gate they were met by Mr Benoit Mottrie MNZM, who is the chairman of the last Post Association and Deputy Mayor of Ypres Jef Verschoore.

On Tyne Cot they were welcomed by Mayor Dirk Sioen and Hon Capt. RNZN Freddy Declerck MNZM (former chairman Memorial Museum Passchendaele 1917).
On every spot there was a brief historical account. The Prime Minister and his wife were very attentive and interested. He had at least two, maybe three Great-Uncles who have been here on the Western Front, one of them earned the Military Medal for acts of gallantry in the field in 1918 in France. At least two of them survived. We have to do more extended research to find out in detail what happened with them.
We think it’s very significant that the Prime Minister came to the Battlefields. It is a great way to start the 2017 commemorative year. 2017 is very important because it’s exactly 100 years the Battle of Passchendaele was fought from 31 July till 10 November 1917. The epilogue to this, the Battle of Messines was in June 1917. At the start of the Battle of Passchendaele, end of July, the New Zealanders have been in Comines-Warneton (La Basseville) on the right hand side flank of the commonwealth forces.

In June 1917 they took Messines and in October, during the 2nd phase of the Battle of Passchendaele they took ‘s Graventafel but in an attempt to take Belle Vue height on 12 October they suffered 2,700 casualties in less than four hours. 846 men died that day. In the winter of 1917-1918 the New Zealanders have been in Polygon Wood in Zonnebeke. They lost 3,000 men during this winter.

2017 will be a commemorative year for many families in New Zealand. Almost every original family has relatives who have been here 100 years ago. In those days they could not come to mourn over the graves of their beloved sons and husbands. All those years, many of those gravestones haven’t got any visitor. We hope that as many New Zealanders as possible will come over to be here for the centennial.
The key dates for 2017 are; ANZAC day on 25 April, the Battle of Messines on 7 June, the Battle of Passchendaele on 12 October.

There will be other events around those dates, also on 4 October 2017,  but 7 June and 12 October are the official New Zealand commemoration days.