HE Dr. James KEMBER, NZ ambassador to France on Pilgrimage in Flanders

On 19 and 20 October 2016, HE Dr. James KEMBER, New Zealand Ambassador to France was on pilgrimage together with Mrs Allison KEMBER and the DA Captain RNZN Shaun Fogarty, MNZM and Mrs Foagrty to the battlefields of Northern France and Belgium.
Both Flanders have been visited because one cannot see history separated by today's border. During the war, the only border was the front line.

On 19 October he visited the Somme, Longueval and Flers in the morning, Morbecque and La Motte au Bois in the afternoon. The NZ involvement at the Somme is well known, however Morbecque and La Motte au Bois are a forgotten page in history.
The Chateau of Baroness Ernest de La Grange has been a HQ for many units during WOI, including units and members of the ANZAC Corps and the NZ Division. Part of the (Maori) Pioneer Bn was also there working as foresters together with French, Australian and Canadian foresters.


In the early evening there was a visit to La Basseville (Comines-Warneton) and Messines.


In the evening HE James KEMBER was the guest of honour under the Menin Gate where he read the Ode and was laying a wreath.

On 20 October they did a battlefield tour in the Passchendaele area with a visit of the Memorial Museum Passchendaele 1917, Tyne Cot Cemetery, 's Graventafel, Wieltje, Frezenberg and Polygon Wood.

In the  early evening there was a visit of Cité Bonjean Cemetery and a visit to the local museum of the UACA volunteers in Armentieres.

On 12 October Kath and Stan Hansen came to visit the battlefields in Flanders, in the trail of their family members who came here and died on 12 October 1917.

You can read the story about the Hansen family here: http://thebelgianshavenotforgotten.blogspot.be/2016/04/anzac-cousins-in-arms.html

we have been helping with the research for the Hansen family. Since one year a team of about 5 people in Belgium and some friends in France have helped to search the history about Bert Hansen, the only NZ POW in WWI who escaped twice from the Germans. He has been helped by Belgians, most of them noble families in and around Brussels and people from the Walloon part of Belgium.
you can read the story here: http://thebelgianshavenotforgotten.blogspot.be/2015/07/search-notice-opsporingsbericht-avis-de.html

Dr Ken Baker has been very instrumental in the research helped by Mrs Dany Kohl, Mrs Claire Dujardin and Freddy Declerck who was organizing this battlefield tour and a small ceremony. The same day of this visit, there was a meeting with HE the Ambassador of New Zealand, the Defense Attaché, people from the embassy and people who came from New Zealand Defense and Foreign Affairs to discuss the events for next year in Zonnebeke/Passchendaele. In the morning the Hansen family was doing a battlefield tour, in the afternoon there was a visit of the Memorial Museum Passchendaele 1917 followed by an official ceremony at Tyne Cot Cemetery. The NZDA was MC and we had luck to have a bugler (Bart Degroote) and a piper (Guido Smeyers).

The official guests from the Embassy and from New Zealand have been with us for this ceremony. The last visit of the afternoon was Polygon Wood. In the evening the group came together under the Menin Gate to close the day with the Last Post.

Waimakariri Pilgrim in Passchendaele with a mission!

Mark William Thompson was the Great-uncle of Simon Marham who is Manager Strategy & Engagement in the Waimakariri District Council. Waimakariri is twinning with Zonnebeke/¨Passchendaele. The family was not aware of what happens to Mark Thompson, they did not know if he was commemorated or if he had a grave. Mark Thompson died on 5 October 1917, no 99 years and 2 days ago. He was in the second wave of the 4th of October attack on 's Graventafel during the Battle of Broodseinde, part of the Battle of Passchendaele. On his right hand side was 2nd Auckland with Dave Gallaher. When they had reached the Blue Line around 09.20 am, the attack was a huge success.


They were ordered to do a new attack in the afternoon against Adler Farm. Adler Farm was heavy defended by German machine guns and it was impossible to take that position. New Zealand suffered some casualties and Mark was missing. The day after, on October the 5th, he was reported as killed in action.

In 1919-1920 his body has been found near the place of the attack, exhumed, positively identified from a field grave and reburied on Tyne Cot Cemetery. The family was not aware of that and nobody came from the Uttermost Ends of the Earth to pay his respect until today.
Simon told me that he has known his great-aunt very well and she was 101 when she died. She always spoke about her older brother who was killed in Passchendaele and she was asking him to come and find out what happens.
Simon was here today, between a conference in the USA and a meeting in the UK for a couple of days in Brussels. It was a huge privilege to help him and the family with the research and to show him around today, from Messines to Passchendaele. It was alos an emotional day, especially for him but I have to acknowledge that it was also an emotional day for me too. I have passed hundreds, maybe thousand times his grave and never knew what happens with this Kiwi who got for the first time a visit from his family in New Zealand. 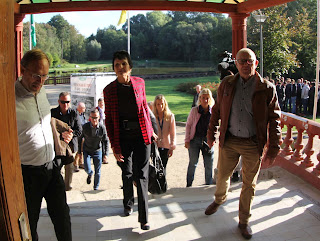 Adrienne Smith from Waimakariri was visiting this region for the first time in her life together with her husband Laurence Smith.
Her brother in law is living in Waterloo with his family and was happy to bring them from Waterloo to the Passchendaele region as a guest of the New Zealand Pilgrimage Trust. 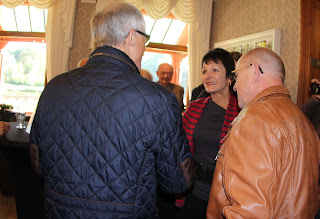 It was a nice surprise for here to see that she was the 1,000,000 st visitor since the opening of the museum in 2004. The Flemish Minister President was there to welcome her together with the council of Zonnebeke. Of course it's very special to be a guest of honour this day but it is even more special that she is from Waimakariri, the twin town of Zonnebeke. 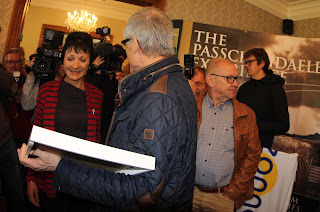 The visit to the dugout, together with the Minister President was of course a highlight today. Not many people could say they have been in a real dugout. After the visit to the dugout and a small reception in the MMP1917 the Smith family was visiting the Museum, doing a battlefield tour in the trail of the New Zealanders in Passchendaele, having a Passchendaele Cheese lunch in St Jef (the Old Cheese Factory) and continued on the Nga Tapuwae trail to explore the deeds of their forebears. 's Graventafel, Belle Vue Spur, Passchendaele church, the Visitor Centre , Tyne Cot Cemetery and Polygon Wood have been visited today. The day was closed with the Last Post Ceremony under the Menin Gate. 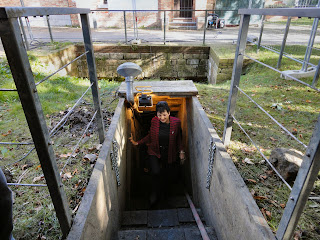