For the past two years Victory Medal, commemorative sculpture has been touring to installations in Provincial Museums throughout New Zealand.


Its final installation in New Zealand is on Remembrance Ridge in Wellington Botanic Gardens spanning the months of the centenary of the New Zealander involvement in the Battle of the Somme. September 15 – November 13 2016

The Unveiling of ‘Victory Medal’ and Ceremony for the centenary of the New Zealanders first engagement on the Western Front in the Battle of the Somme 15 September, was at Remembrance Ridge in Wellington Botanic Garden 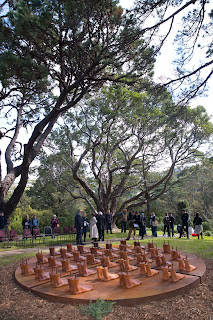 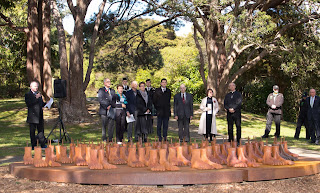 It was a wonderful event on an unusually beautiful still day.
Her Excellency Mrs Florence Jeanblanc-Risler Ambassador for France in New Zealand and members of the French Embassy attended. Don Staples, Belgian Consul in Wellington represented the Belgian Embassy in Canberra.
Both Councillor Justin Lester, Deputy Mayor of Wellington and Sarah Dennis Former New Zealand Ambassador to France spoke of the important connections between Wellington and France and Belgium , and of the installation over the next few years of Victory Medal in Europe.

The installation on Remembrance Ridge in Wellington Botanic Gardens will leave for Europe late November.


There is already a work installed in Belgium, Zonnebeke, in the Memorial Museum Passchendaele 1917 and also in the Navy Museum in Devonport NZ.
With this work in France Helen Pollock will have linked together Belgium, France and New Zealand with three different works remembring World War I and the New Zealand sacrifice.
“As did the young men of the provinces a century ago, Victory Medal will leave New Zealand from Wellington for the sea voyage to Europe. It will cross the countryside of Northern France and Belgium, to the three battlefield towns of Arras, Messines and Le Quesnoy”. Like 7500 young New Zealand soldiers in WW1 it will remain in France.”

Victory Medal Tour Destinations in France and Belgium from March 2017:

Arras, France March – June 2017. Victory Medal installation in the Place des Heroes in front of the Belfroi (UNESCO Site) for the Centenary of the Battle of Arras April 9 ( and commemorating the New Zealand Tunnelling Company)

Messines Ridge in Belgium June 2017 - February 8 2018 Victory Medal  in the Town Square to commemorate the Centenaries of the New Zealand Division involvement in the Battle of Messines, June 7 – Feb 2017,

Polderhoek, December 2017 and final withdrawal of the New Zealanders from Belgium February 1918.

The Victory Medal Tour is in partnership with the New Zealand Military Historical Soc. and has received funding from New Zealand Lotteries, the New Zealand France Friendship Fund and Auckland RSA. It has the support of the Wellington City Council.
- September 22, 2016 No comments: Links to this post

Longueval, Battle of the Somme commemoration 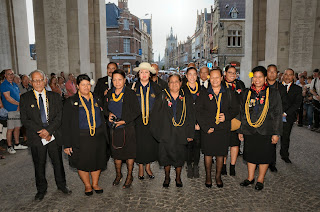 Yesterday, 12 September 2016, we could host a group of 16 from Niue. Commissioner General for the commemoration of WWI in Belgium, Paul Breyne, Last Post Association Chairman Benoit Mottrie MNZM and New Zealand Pilgrimage Trust Director Freddy Declerck MNZM were talking about commemoration and remembrance with the group. 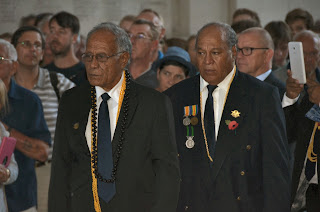 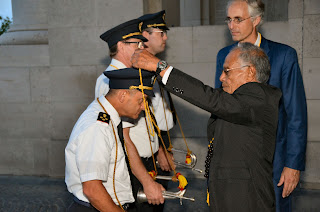 Wreath laying was done by the Minister, the President of the Niue RSA and one of the women who were with them. After the ceremony, the Minister was thanking the buglers and giving them a traditional shell bread. 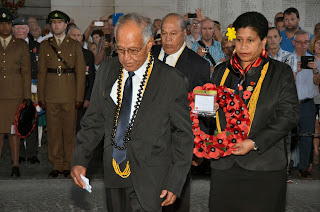 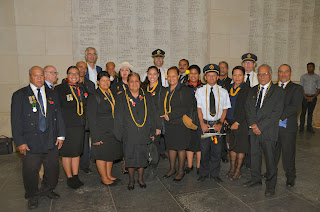 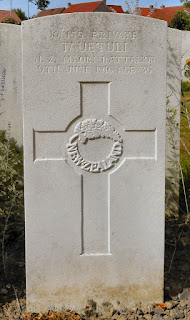 Today, 13 September, we have gone to the graves of the two Nuieans to pay our respect to them. 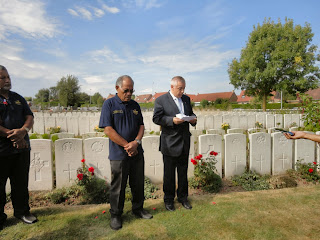 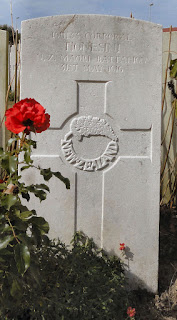 It was a short but moving ceremony the group did. we have been assisted by the Mayor of Bailleul, Mr. Marc DENEUCHE, the deputy ayor Mr. Bernard HEYMAN and councillor  Mr. Jean CORDONNIER, Mr. Gérard LEMAIRE who is a local historian who did a lot of research on Bailleul, we Souvenir Française was represented. Another good friend and passionated about WWI, Dominique BASCOURS was there to take some photos of the ceremony. Mrs Noella TAHON from Staple was also paying her respect during the ceremony. She was the driving force for the remembrance service for Charlie HILLMAN on the 20th of  August.
the ceremony started with singing and praying, after thise was a speech of the Mayor, Mr. Lemaire was giving the historical context. The Hon Pokotoa SIPEL,  Minister of  Social Services from Niue was thanking the people of France and Belgium. 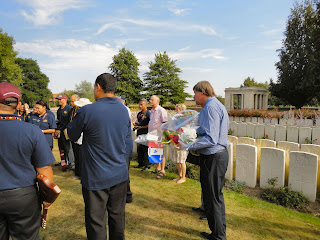 There was also a wreath laying sequence done by the French hosts. The ceremony was closed by a prayer and a hymn.
The people of Niue were very grateful and are now heading for Arras and Thursday 15 September 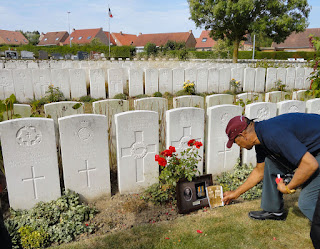 they will be at Longueval for the New Zealand official Somme commemoration.

The Pilgrimage of Sir Peter Jackson 2016


The grandfather of Sir Peter Jackson was with the 2 South Wales Borderers in the 29th Division when he was wounded on the July 1st 1916. He was out for a couple of months but once recovered he came back to his unit who was in Flanders that time.. In 1917 he was fighting in the Battle of Langemarck, the Battle of Broodseinde and the Battle of Poelcapelle during the Battle of Passchendaele.
Sir Peter made this pilgrimage to the Somme to find out exactly where his grandfather was wounded. But first he wanted to pay a visit to the Battlefields of Flanders where not only his grandfather was in 1917, but also where his great uncle was missing during 2ndYpres on 8 May 1915. He invited his uncle Frank (90 years) and two cousins to come with him.
The New Zealand Pilgrimage Trust had the honour to help them during their visits to places of interest for New Zealanders and people of Wales.
We know Sir Peter since a couple of years and it is always a pleasure to host him.
Monday we have been on the 1915 places of interest for him and his family, yesterday we have been in Messines and the MMP1917 in Zonnebeke and today we did a battlefield tour. the rest of the week will be in Northern France and the Somme.
It was nice to hear that he loves the Memorial Museum Passchendaele (he was already visiting in 2014 , see: http://thebelgianshavenotforgotten.blogspot.be/2014/05/sir-peter-jackson-in-mmp1917.html ) and made a promise to come back.

It was a special day for me on 3 September to welcome Commodore (Ret'd) David Palmer RNZN and his wife Rosemary in our region again. He has been here before but he promised to come back to pay his respect to his forebears with some more time. He did a battlefield tour in Northern France in the trail of the New Zealanders, after he has been already doing a battlefield tour in Flanders with me in the past. We had a nice evening together and we could share a common history. It was also nice to know that his wifes great great grand mother was a Belgian lady.

By chance it was the same weekend as the forging of the poppies on the market place in Ypres / Ieper.  Commodore David Palmer is living in Christchurch, New Zealand and a Christchurch blacksmith was forging 100 iron poppies for the new memorial remembering lives affected by WWI! This memorial will be placed near the German Cemetery in Langemark, but during this weekend the public could help to forge poppies in Ypres/Ieper.


You can see the story of the New Zealand blacksmith from Christchurch who made about those poppies on this link:
http://www.stuff.co.nz/the-press/news/76079575/Christchurch-blacksmith-creating-iron-poppies-for-international-war-memorial

More general you can see more

about the project here
http://www.ypres2016.com/