The Lady from Flanders Fields honours the New Zealand soldiers. 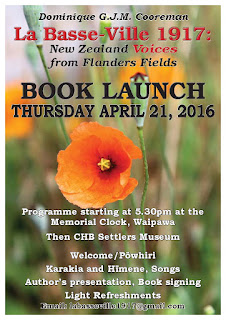 Everyone has been touched by the losses of WWI with its many battles.
The book from Belgian and former judge D. Cooreman describes the La Basse-Ville Operation (mid June until end August 1917) in Belgium. It is probably unique that in this battle only Māori and Pākehā were involved.

This book pictures different aspects of the operation and more personal stories of individual soldiers. Their stories emphasises the horror of it all.

The launch of the book takes place 21st of April 2016 at 5.30pm at the Settlers Museum, after visiting the Memorial Clock at the Main Street both in Waipawa (Central Hawke's Bay).

Many descendants, Māori and Pākehā, will come from all over New Zealand to pay tribute to their forebears and share and show the medals and memorabilia their fathers and uncles have left them.

No doubt this will be a huge event.

The author has been done thorough research everywhere the ‘boys’ went: Cairo, Alexandria, Gallipoli, Hobart, France… and all the places they were from in New Zealand. The last 12 years she spend commuting between New Zealand and Belgium to gather all the information and fill in the puzzles, putting the men in their original context too. It is a story about 100 years ago that is still relevant today.

‘A noted lawyer and judge in Belgium, Dominique wrote this book as a tribute to the New Zealanders who fought in Belgium in the First World War. She has taken her forensic skills and has carried out remarkably detailed research that encompasses more than just the individual soldiers who fought there. It is a story of New Zealanders but one seen through the eyes of a trained mind from a different culture, a world away.
Her investigation examines what it means to be a New Zealander. It not only embraces the events of La Basse-Ville and of a Maori sergeant, but also expands like the tentacles of an octopus, telling the story of the town, its history and how it was absorbed into the two neighbouring towns and is now forgotten. In the same way her story of Charles Sciascia and others examines not only how they came to join the New Zealand Division  and their role in the fighting, but also that of their family and friends and the impact of war on these families and the wider community.
This is done in turn for all of the New Zealanders that she meets in her research. Each chapter becomes not only the story of a person but also a personal journey for Dominique herself. It is her own journey to New Zealand and in meeting and talking to the soldiers’ descendants; she takes us on a voyage of discovery, rich in history and insight. This book is a labour of love from an author who loves her country but is also entranced by these men who came from the ‘uttermost ends of the earth’ to fight and die in Belgium. Nothing is left out: the book delves into the lives of the New Zealanders who fought at la Basse-Ville from 1917 to the present day – almost a century later.’

The book itself defies categorisation. It is part travelogue, part-history. It reflects on the nature of war and its impact on two different societies a world apart: New Zealand and Belgium. It will both overwhelm and entrance you.

It is the story of Dominique Cooreman’s love affair with New Zealand and New Zealanders and we are the richer for it.’ Excerpt from the Presentation of the book by Chris Pugsley, Military Historian, ONZM

‘Dominique Cooreman, the Lady from Flanders Field had come to town. She was embraced by locals in our community; she stimulated, motivated and inspired.’ (…) A website was created and a book written. Family pilgrimages were made to the battlefield where Charles died and a memorial to him, designed by Dominique, now stands. (…)
What a wonderful legacy from a seed sown by a quiet achiever, Dominique Cooreman, who now offers this dignified record of Charles Sciascia’s war and the battle in which he and many fellow soldiers lost their lives.’  Excerpt of the Foreword by Brendan Duffy,  Mayor of Horowhenua


I'm very happy to tell we found the relatives of James Alexander McKenzie. The grandson of James sister (James next of kin during the war) was sending me those additional pictures this week. So we have enough material now to commemorate this remarkable man who was sending money for the poor little children of Fleurbaix, a small village in Northern France. He started to give something in 1916 when he was in Fleurbaix with the rifle brigade. After the war he continued his work until  world war II. During the German occupation it was not possible to stay in contact with the officials in Fleurbaix, but after the war he made contact again with the mayor of the village.
It's possible that there will be a commemoration in Fleurbaix in September this year. If I have a positive confirmation I'll anounce it on my blog and/of on the facebook page with the same name (TheBelgiansHaveNotForgotten).