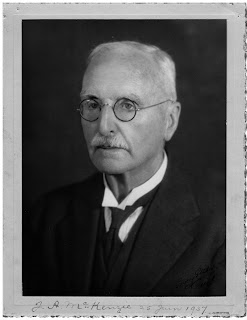 Rev. James Alexander McKenzie was with the Rifle Brigade at the Western Front. He was during some time also in Northern France. He died in Palmerston North in 1946.
The picture is dated 1937.

After the war he stayed in contact with the people of a small village and was even sending some money from time to time to help the poor people in the devastated area.
We are searching for relatives of this exceptional man because this year we want to commemorate his work.