It was with great humility and delight that I received together with Sandy, Benoit and Steven
the award of Honorary Member of the New Zealand Order of Merit.

It was a great surprise to receive such an honour, especially as I have always felt that I, and my fellow country men and women, are the people who are indebted for the sacrifice that many young New Zealanders made nearly 100 years ago.


I'm dedicating this award to all those who came here from the
" Uttermost Ends of the Earth" to fight for freedom, peace and democracy and more specific for those who gave the ultimate sacrifice .


For me and my family it was a memorable and unforgettable moment.
I would have loved to have you all with us yesterday but unfortunately this is not possible.
Therefore I share some pictures with you that have been made
by some friends who could attend the ceremony

For services to New Zealand-Belgium relations and war commemoration
Mr Freddy Declerck served 35 years with the Royal Belgian Navy before retiring in 2004, and has since been Chairman of the Memorial Museum Passchendaele 1917, and was President of the Passchendaele Society of Belgium until 2015.
As Chairman of the Memorial Museum Mr Declerck has been responsible for promoting the remembrance of the Allies, in particular in those who fought on the battlefields of Flanders during the Great War. He is an acknowledged expert on the New Zealand Division's involvement on the battlefields of Flanders. He has welcomed and escorted a number of New Zealand dignitaries, including Prime Ministers and Parliamentary groups through the Museum. He has also assisted New Zealanders in locating family members buried in Flanders Fields. He brought a touring exhibition of World War One memorabilia entitled 'The Belgians Have Not Forgotten' to New Zealand in 2009. He helped organise the New Zealand Veterans Band tour of Belgium and France during the 2012 ANZAC commemorative events. He initiated and coordinated the annual Dawn Service in Polygon Wood at Butte's Cemetery. He played a major role in the twinning of the Zonnebeke Municipality in Belgium with the Waimakariri District Council in 2007. Mr Declerck was made a Life Member of the Royal New Zealand Returned and Services Association. Recently he has been appointed as an Honorary Captain of the Royal New Zealand Navy.

For services to New Zealand-Belgium relations and war commemoration
Mr Sandy Evrard is the mayor of Messines and has been instrumental in raising awareness of the role New Zealand played in Belgium during the First World War, particularly the liberation of Messines in 1917.
Since 1975 Messines has had a twin town relationship with Featherston, as most troops had departed from the Featherston Army training camp. Mr Evrard has upheld this relationship with Featherston and in 2000 travelled to New Zealand at his own expense to present at commemorations for the 25th anniversary of the twin town relationship between Featherston and Messines. Over the course of his 20 years as councillor and mayor he has supported the erection of a number of memorials honouring New Zealand and its soldiers, most recently in 2014 a life-size bronze statue of a New Zealand solider in the town square. He led a major redevelopment of the town's museum to highlight New Zealand's role in the battle, and organised for the museum to be opened with a formal powhiri. He has hosted the annual official New Zealand delegation for ANZAC Day in Messines, and organises a breakfast for New Zealanders on the day and for locals to fly the New Zealand flag. Mr Evrard supported two reburial ceremonies for New Zealand soldiers found during excavations of Messines in 2012 and 2013.

For services to New Zealand-Belgium relations and war commemoration
Mr Benoit Mottrie has been a committee member since 1990 and Chairman of the Last Post Association in Ieper (Ypres) since 2006.
The Association is a voluntary organisation that organises the nightly sounding of the Last Post at the Menin Gate memorial, which records the names of more than 55,000 Commonwealth soldiers including New Zealanders who were killed in the fighting around Ypres Salient during the First World War and have no known grave. The nightly ceremonies are attended by an audience of up to several thousand. Mr Mottrie oversees the provision of buglers and ushers, coordinating performances by visiting bands or choirs, arranging attendance by VIP and military representatives, and the securing of donations and recruitment of new members. He acts as master of ceremonies for major commemorative events such as Anzac Day and Armistice Day. He has supported the annual Anzac Day Dawn Service at Polygon Wood and the annual Anzac Day ceremony in Ieper. He was involved with reburial ceremonies in 2012 and 2013 for New Zealand soldiers killed in the battle of Messines. Mr Mottrie has taken buglers of the Last Post Association on a number of overseas visits, including to New Zealand in 2007 where they sounded the Last Post in several cities.

For services to New Zealand-Belgium relations and war commemoration
Mr Steven Reynaert is the council historian and youth and cultural affairs coordinator of the Belgian town of Messines and has been instrumental in raising awareness of the role New Zealand played in Belgium during the First World War, particularly in the liberation of Messines in June 1917.
Mr Reynaert was the principal driver of the development in 2007 of a guided walk through Messines called 'In the Footsteps of the New Zealanders', the first and only guided battlefield tour in Flanders to focus on the battle of Messines and New Zealand's role. He has served as the main local guide for the past seven years, often taking tours in his own time. In 2013 he drove a project to digitise the tour for a mobile app to be downloaded for free from the local museum. He led a redevelopment of the town's museum, designing the internal content to focus on New Zealand's role in the battle and to highlight the modern day connection between Messines and New Zealand. He has provided logistical and organisational support for the annual Anzac Day ceremony in Messines and other major New Zealand commemorative ceremonies. Mr Reynaert has provided significant support to the development of the New Zealand government's western front heritage trail project.

some other photos can be seen on: http://www.wo1.be/en/youwerethere/8280/for-new-honorary-members-of-the-new-zealand-order-of-merit 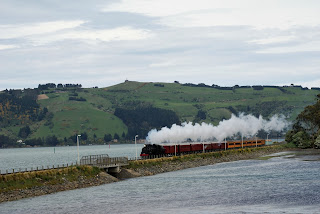 Locomotive AB608 (built 1915), later named “Passchendaele” as a memorial to all the railwaymen who died during the First World War, was in Dunedin this weekend, running excursions along the harbour shoreline. 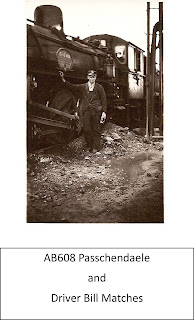 My late Uncle Bill Matches survived the Third Battle of Ypres (Passchendaele).  On his return he joined NZ Railways and frequently drove the historic locomotive on main trunk passenger services.  I remember him recounting how the firebox would be stoked on the climb to the Mihiwaka Tunnel, then he and the fireman would cover their noses and mouths with wet handkerchiefs, and lie on the footplate to minimise smoke inhalation during the transit through the tunnel. 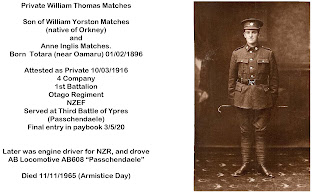 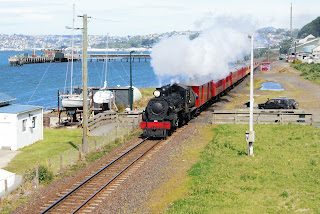 He also described “going over the top” at the battle, and with a mate being first into a German trench. On a shelf were a pair of Zeiss binoculars and a Luger pistol.  The mate grabbed the former, so he got the Luger.  As a ten year-old, I was once allowed to hold this trophy. (It was very heavy!). Sadly, after his death on Armistice Day in 1965,  it was handed in during an arms amnesty, and probably finished up at the bottom of Cook Strait.