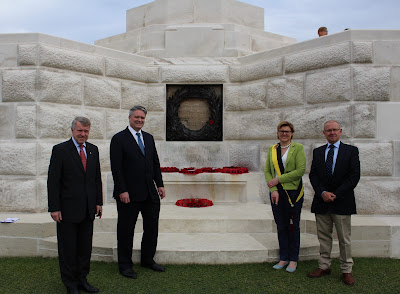 A delegation from the European Australian Business Council (EABC) has visited Tyne Cot Cemetery today. The delegation was led by the Australian Minister for Finance, Senator the Hon Matthias Cormann. His party was around 50 people. On the picture he is with the Alderperson for the Centennial on his left and the Australian Ambassador to Belgium on his right. The Minister is a Belgian who went to Australia in 1994. He's coming from the Eastern part of Belgiam (Eupen) and is speaking French, German and Flemish.
It was very special to guide an Australian Minister with Belgian roots.