New Zealand’s hospitality towards a Belgian…

After a journey through 4 different countries, I have finally made it to the last country on my list. The saying goes “save the best for last” and that is exactly what I have been doing.

An uneventful flight took me from Brisbane to Auckland, a city which proved to be much bigger than I anticipated. I had been “warned” several times when travelling through Australia, that New Zealand would impress me in many ways. All I can say is that my Australian contacts have not been lying. Auckland proves to be a wonderful city but more important to me: the people I have met were the best ambassadors of their country. From the moment I arrived, I have been spoiled with attention, I have been taken around to explore the city, I have been taken to so many sites (amongst which the place where our exhibition “The Belgians have not forgotten” had been put on display), I have caught up with Helen Pollack, who is currently working on another piece of art linking the history of both our countries… all in all: Auckland left a more than positive first impression on me.!

Apparently I am not the only Belgian, with that feeling as I was hosted for a couple of nights by a mixed Belgian-New Zealand couple… I celebrated the 21st of July, our Belgian national day, in a more intense way than I have ever done before, surrounded by New-Zealand friends, drinking Belgian beers, while I was supporting their economy drinking New Zealand’s white wine!

During my stay in Auckland, I stayed with members of the Auckland Passchendaele Society ( www.passchendaelesociety.org ): a group of WW I enthusiasts who are keen to make sure that history is kept alive. They organised a lecture in the Auckland War Memorial Museum, which proved to be a very successful event.

The flight from Auckland to Wellington, proved that the Air New Zealand pilots know their job: the turbulence just before landing was the strongest I had been confronted with but those pilots put the plane down with the gentlest touch one can imagine.

The welcoming I was given in this city proved to be just as warm as the one in Auckland. My hosts went out of their way to assure that every possible need was met but more than that, they offered a warm home to me. My lecture at the RSA attracted a strongly interested audience. Being able to bring the story from the battlefields to an interested group of people is the most rewarding of all.

My next journey took me to Masterton, where a lecture in the local Wairarapa Archives was attended by more people than anticipated. Extra chairs had to be brought in till we got to the stage that there was no more room. Each lecture makes it clear to me how strongly connected our two countries prove to be.

Keeping in mind that my journey is not purely a working holiday, I have been invited to a birthday party too: it gave me the opportunity to get to see another aspect of life down under. I can not deny that I like it more and more…

The journey from Masterton to Featherston is one of breathtaking views. Landscape that surpasses any imagination: this is what so many soldiers left behind when leaving their country to fight for the freedom of the Belgians. Only people, who have seen this, will understand what I mean: New Zealand is a different country from any other I have been to. Somehow the combination of people and nature seems to be in the best balance… here you find the best of both!

Featherston has a unique relic of the Great War: the Anzac Hall, which is still very much, preserved the way it was. This was the place where so many soldiers, being trained in the largest NZ camp at the time, had their last dance. The impressive wooden halls, threw me back in time as I entered it yesterday evening. I couldn’t stop myself from thinking that those young men, who were cheerfully saying goodbye here, could never have imagined what Flanders Fields were going to mean to them…

A very interested audience attended my lecture in Featherston: one lady stepped up to me, saying that her father fought in Passchendaele. My talk moved her almost to tears. It made me feel very humble and proud at the same time:  bringing the history to the people with an interest is my personal way to say thank you for the involvement of those soldiers who really came from 'the uttermost ends of the earth'

The Memorial Museum Passchendaele 1917 was hosting the  Auckland Police Pipe Band for a couple of days. The band members and supporters (42 in total) came from Bazel Tattoo and have been on Flanders battlefield in the trail of the New Zealanders. Today they have been on Tyne Cot and Polygon Wood. Yesterday Messines, Plugstreet, Warneton/Waasten en Passchendaele. 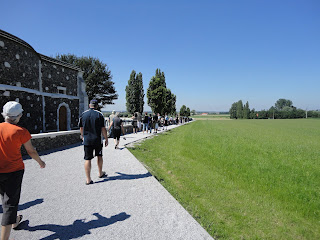 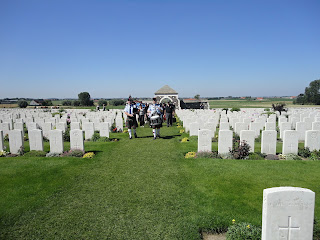 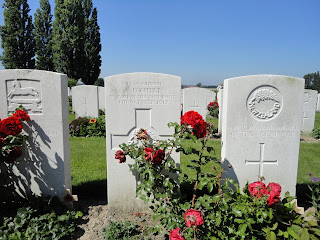 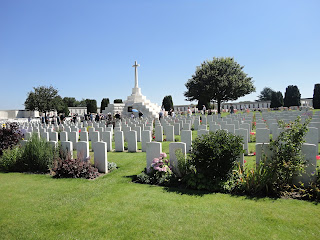 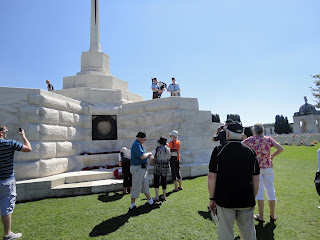 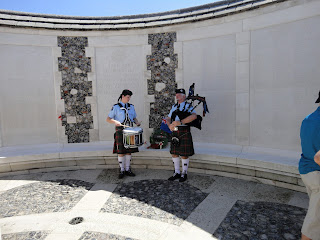 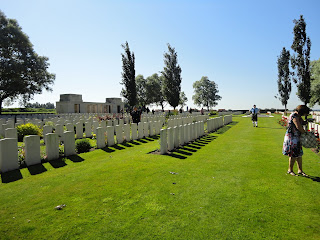 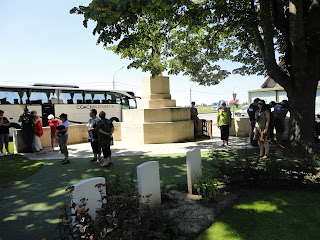 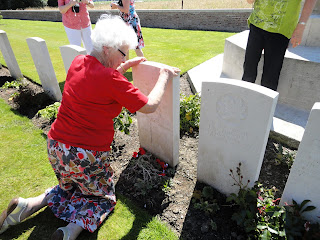 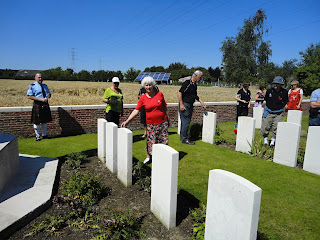 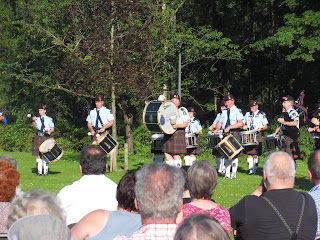 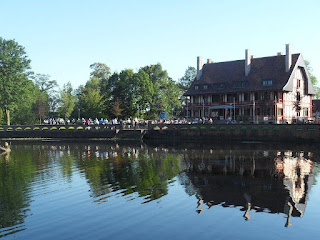 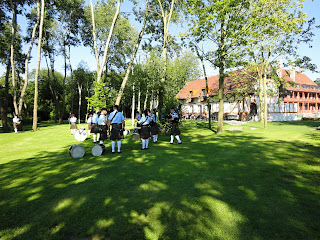 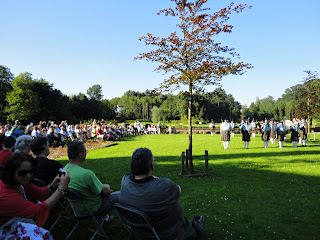 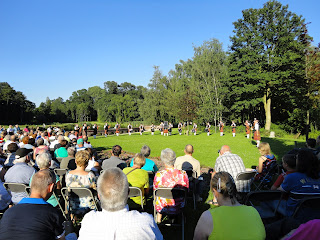 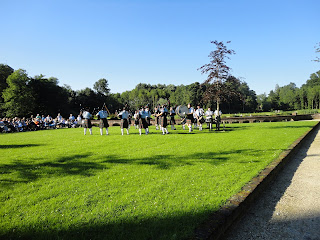 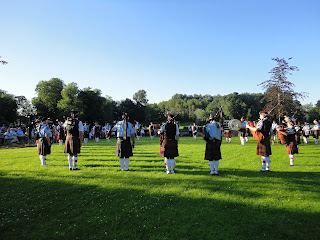 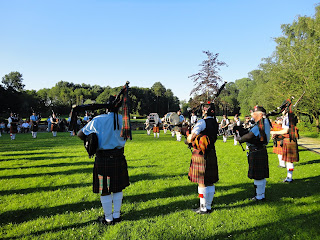 Next Monday 23 July 2012 at 07.00 PM, the Auckland Police Pipe band will be in Zonnebeke for a concert together with the Passchendaele Pipes and Drums.
It's a free concert and you're welcome at the Memorial Museum Passchendaele 1917  for this event. 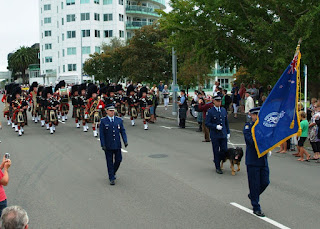 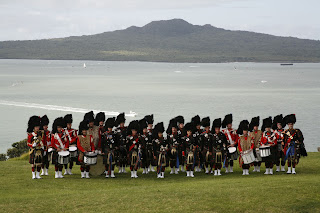 The Hon Minister Christopher Finlayson has anounced the appointees to the Government’s First World War Centenary panel but also the Legacy projects.

A grant of 120,000 Euros has been provided to the Passchendaele Memorial Museum 1917 in Flanders to assist in the expansion of our museum and the installation of an expanded interpretive New Zealand exhibition.
This is the first of a series of projects to improve interpretation at battlefield sites significant to New Zealand.

The main effort will be to work with local museums and visitor centres at places where New Zealanders served, such as Gallipoli and along the Western Front, to upgrade their exhibitions which tell the story of New Zealand in the war.

In addition, interpretation at New Zealand’s battlefield memorials and at the battle sites themselves will be upgraded.


It was  the New Zealand Ambassador in Brussels,  His Excellency Vitalis Vangelis who handed over the cheque to the Deputy Mayor of Zonnebeke , Franky Bryon.

Of course the community of Zonnebeke is very grateful and honored to be the first partner here at the Western Front.

Speaker of the House of Representatives from NZ visits Passchendaele

Yesterday, our museum was hosting a very important delegation from New Zealand.

together with Beryl Bright, Senior Private Secretary to the Speaker and Kirstin Harvey, Parliamentary
Relations Manager. They visited the former battlefields of Flanders.

In Zonnebeke they have been welcomed by Deputy Mayor Franky Bryon and Freddy Declerck, chairman of the Passchendaele Society 1917. 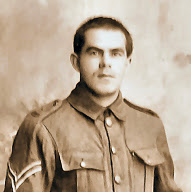 In 2007 the Sciascia Family came from New Zealand to Belgium to honor Sgt Charles Sciascia. Exactly 90 years after his dead, they dedicated a memorial in the vicinity of the place where he was lost during the attack on Warneton/Waasten on 31 July 1917, the very first day of  the Battle of Passchendaele.

38 members of the family came and yesterday, nearly 95 years after his dead, some members came back to honor Sgt Sciascia and to inaugurate a new plaque with a description of the monument.
It was also here that Leslie Wilton Andrew earned his Victoria Cross (Citation: "On 31 July 1917 at La Bassee Ville, France, Corporal Andrew was in charge of a small party in an attack on the enemy's position. His objective was a machine-gun post which had been located in an isolated building, but on leading his men forward he encountered another machine-gun post which was holding up the advance of another company. He immediately attacked it, capturing the gun and killing several of the crew. He then continued with his attack on the original objective and finally captured the post, killing a number of the enemy and putting the remainder to flight.").