Members of Parliament at Passchendaele


﻿﻿
﻿﻿
﻿﻿﻿
﻿﻿﻿ The MP Delegation was visiting the Passchendaele Memorial Museum and was on the battlefield at Frezenberg, Wieltje, 's Graventafel en Belle Vue. But also on Tyne Cot Cemetery.   The MP delegation was guest of honour on our annual Crest Farm Ceremony. Every year at 6 pm on 10/11 we remember the end of the Battle of Passchendaele and the capture of Passchendaele by the Canadian Forces. Every year we remember not only a Canadian soldier by name but also soldiers from other Commonwealth Countries and a German soldier.   For New Zealand we commemorated George Knight 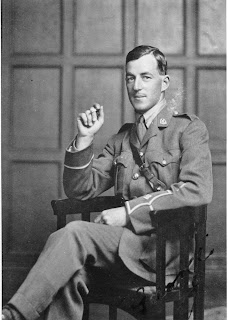 You can find the text that was read by MP John Hayes during the Ceremony: 8/1532 Lieutenant George Bernard Knight
Otago Infanterie Regiment
Killed in Action, 12 oktober 1917

George Knight, a farm hand of Dannevirke, joined up on 20 December 1914, enlisting as a Private at Trentham Camp. He embarked on 14 February 1915 with the Third Reinforcements and after training in Egypt; he saw his first action at Gallipoli. In August 1915, he was hospitalised due to illness and after discharge from the hospital in Cairo, he was employed at the School of Instruction at Zeitoun Camp.

In February 1916 he was promoted to Lance Corporal and embarked for France in April 1916. He was promoted to Corporal and was wounded in action at Armentieres. After a period of convalescence in England and further training, he was promoted to Sergeant. He was a natural leader with ability and charm, and seemed to influence all those around him. Two months later he was nominated for officer training and on 15 June 1917, he attained the rank of Second Lieutenant.

Five days later he left for Etaples in France and joined the 2nd Battalion, Otago Infantry Regiment ‘in the field’. From this point on he was involved in much of the heavy fighting and on 12 October 1917, it was his turn to go ‘over the top’ up Bellevue Spur, towards the tiny village of Passchendaele. Leading his men, as commander of 8th (Southland) Company in the 2nd Battalion Otago he was at the centre of the first wave. He encountered the impenetrable wire and he was cut down by a burst of machine gun fire only feet from the enemy positions. His body was never recovered and on his Service Record, it states: “Many of these men were buried by stretcher bearers where they fell, to right and left of road beyond Waterloo Farm across Ravebeek and up towards cross roads”.

The casualties incurred by the New Zealand Division on 12 October were approximately 2,730 !

Nearly every New Zealand family was affected by Passchendaele, or knew someone who was.

In less than four hours more than 60% of the New Zealanders who had taken part had become casualties. In terms of lives lost in a single day, this remains the blackest day in New Zealand’s post-1840 existence

on the evening of October 23 the Canadians, who were to play such a major role at Passchendaele, arrived to take over the New Zealand sector and other parts of the line.

What was left of the New Zealand Division retreated and Passchendaele was eventually taken by Canadian forces on 6 November after two further battles. The village had been completely destroyed. By the time the New Zealand Division was finally withdrawn from Flanders in February 1918 three Victoria Crosses had been awarded for bravery but they had suffered more than 18,000 casualties including around 5,000 deaths.

All in all 12,500 New Zealanders died on the Western Front out of the total of 18,188 who lost their lives in this war. The magnitude of the death toll in the First World War is put in perspective when it is realised that more soldiers were killed in this war than the total of the Boer War, World War Two and Vietnam combined.

The loss of George was another blow to his parents, Nellie and Herbert Knight, who had already lost their son Herbert Augustine at Gallipoli. The war was to bring further tragedy to the Knight family who later lost another son, William, on 1 September 1918 near Bancourt, France. George is commemorated on Tyne Cot Memorial, New Zealand Apse, Tyne Cot Cemetery, Passchendaele, Belgium.


MPs Phil Goff, Paul Hutchison and Su'a William Sio  laid a wreath on behalf of the Government and People of New Zealand.