Two cricketers who bowled for Canterbury

It might have been 77 years apart, but both of these cricketers bowled for Canterbury – George Wilson in 1914 and Roland Lefebvre in 1991. George was a quality leg-spinner and Roland a medium-pacer whose economy rate is legendary.


George Charles Lee Wilson was a Canterbury leg-spinner who, in February 1914, played against the private Australian team which was led by Arthur Sims and included the great Victor Trumper. The Saturday of the match has gone down as one of the most remarkable days in New Zealand cricket history - Trumper and Sims shared an eighth wicket stand of 433, still the world first-class record for that wicket, with Trumper making 293 in 190 minutes. George Wilson did not take a wicket but returned good figures in the circumstances of 19 overs, two maidens, for 95 runs.

George Wilson also played five representative matches for Canterbury that season and recorded best bowling figures of 7-80 against Wellington. In his total of six first-class matches that season, he took 31 wickets for 716 runs at an average of 23.09. He also recorded two 10-wicket matches and four five-wicket innings. The figures mark him out as a quality leg spinner of the time.

The son of Samuel and Jane Wilson, of Christchurch, George Wilson was a carpenter before he became a private in the First Battalion of the Canterbury Regiment. He died on December 14, 1917, at the age of 30, during the harsh winter at Polygon Wood and is buried in the small Polygon Wood cemetery opposite Buttes.

Another member of the same Canterbury XI that played the Australians also died in the war. He was Rupert George Hickmott, an opening batsman who played 17 matches for Canterbury from 1911. Rupert Hickmott died aged 22 in 1916 on The Somme in Northern France. 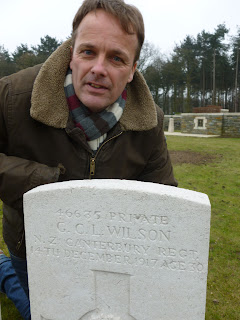 Roland Lefebvre is the former Dutch national captain who played in five ICC Trophies and two World Cups. Fully professional, he played for Glamorgan and Somerset in the UK, Orange Free State in South Africa and, in the 1991 season, Canterbury in New Zealand. Known mainly for his ability to stop batsmen scoring, one batsman he has bowled against moaned recently that he seemed to know exactly what the opposing batsman was going to do before the batsman himself knew.

Now Cricket Performance Manager for the Royal Netherlands Cricket Board, Roland’s figures included a best First Class return of 6 for 45, and a best A List return of, wait for it, 7 for 15. It’d be unfair to draw any comparisons between the two, but both gave outstanding service to their teams.

Roland and his son Marc, who is following in his Dad’s cricketing footsteps, visited the museum and the Passchendaele area yesterday.