• A Commemoration Ceremony at the Auckland War memorial Museum Wednesday 12 October at 11am preceded by a performance by the Tongan Brass band from 10am. Details following.

The New Zealanders on the Western Front: 3 Documentaries 6th to 12th October (see poster attached)
2pm at the Academy Theatre in Auckland City
10am at the Victoria Theatre in Devonport

There will be Questions and Answer sessions facilitated by the Passchendaele Society after every session.

The New Zealanders on the Western Front: 3 Documentaries were shown at the Victoria Theatre last ANZAC Day to a full house, so bookings are definitely recommended at www.iconiccinemas.co.nz/movies/4853.php

Actor Robyn Malcolm, sculptor Helen Pollock and film maker David Blyth have individually made the journey back to the WW1 battlefields of Northern France and Belgium to retrace the footsteps of their forefathers. Each has created a personal tribute to the sacrifices of the New Zealand Division on the Western Front.

The films contain interesting archival footage of the New Zealanders on the Western Front in WW1; and particularly around Passchendaele and Le Quesnoy. 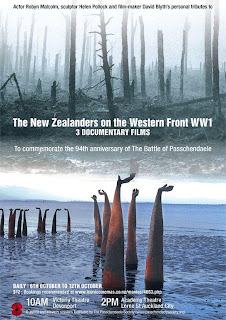