12 October - Remembrance Day for the fallen New Zealanders in Passchendaele 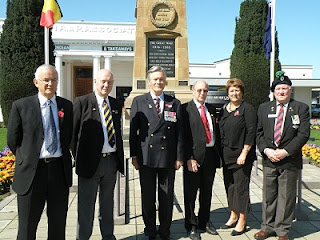 Today the Waimakariri Passhendaele Trust in conjunction with the combined RSA held a service to commemorate the links forged between our two countries during the first world war but importantly on the 12 October
I know that Don Staples in Wellington has organised a similar service , as have the Auckland connection.
We will together lift the prominence of this day in New Zelands history
We will be thinking of you all today

the picture is from Luke Thomas, The Christchurch Mail

I am very pleased to report that we held a commemoration for the Passchendaele Offensive this morning at the National War Memorial in Wellington.

The order of ceremony was as follows:

· Respects paid at the Tomb of the Unknown Warrior.

· Tolling of the Peace Bell (by me) during which Admiral Ledson escorted the party into the Hall of Memories.

· Laying of wreath by H.E. Renault and H.Consul Staples

· HE signed the Visitors' Book

I have just returned from our Commemoration Service at the Cenotaph outside the Auckland War Memorial Museum. It felt just right. We had a meeting afterwards in the Museum and there was agreement that we should repeat this type of commemoration service next year with something a bit more special in 2012 and of course 2017.

There was a wish for a bit more formality in the organising group with people indicating a preference for an " Auckland Passchendaele Society" which would meet more regularly so the next meeting will be hosted by the 3rd Auckland and Northland Regiment and we will further that idea.