A documentary marking the most disastrous day in New Zealand’s military history will be released this week, coinciding with the anniversary of the conflict which remains today, New Zealand’s bloodiest day.

Called ‘Our Bloodiest Day’, the documentary explores the New Zealand sacrifice at The Battle of Passchendaele, on October 12, 1917, where in just two hours more than 2800 men were killed, wounded or listed as missing in action.

Casualties on both sides were so bad that an informal ceasefire was granted to allow stretcher-bearers to clear the wounded from the battlefield, a task which took nearly three days.

Producer/Director, Lauren McKenzie says October 12 is a significant date in New Zealand’s history, where more people died in a single day than any other day in our history.

“It is well past time the courage, commitment and comradeship exhibited by the soldiers who fought and died there was more widely acknowledged and understood.

“While, sadly, the voices of the past are now lost to us, we have endeavoured to ensure their memories and experiences are not lost to future generations by talking with their loved ones and a new generation of Belgians who continue to treasure and honour our commitment to peace on their soil. “

Filmed during the 90th anniversary of the Battle, the documentary reflects on the differences of experience and memory of these events in the two countries, focusing on the historical value in the terms of today’s generation, in developing a better understanding of the events of Passchendaele, how it affected our country, communities and individuals.

Passchendaele Society Chairman, Freddy Declerck, helped organise the commemorations, along with members of the society, mostly volunteers and battlefield guides.

“I think no New Zealand family was untouched, and not only at Gallipoli, but even more at Passchendaele. Passchendaele should be important for you too.

“We here in Zonnebeke rever the sacrifice of so many of your young men on our soil and it is pleasing to at last see a film crew recording that event for new generations.

“This story is very dear to our hearts and we are pleased to support any effort to bring it more into focus for the people of your country.”

Lauren Mckenzie has a personal interest in that her great-uncle, Frank Kiddey, is one of those who (while surviving Passchendaele) never came home from the Great War.

He was killed on November 24th, 1917 and now lies buried on the outskirts of a small town called Zillebeke.

But even she had not appreciated the enormity of the battle, and the sacrifice of the New Zealanders, until she set foot herself on Belgian soil.

“Travelling to Europe to film the commemorations provided an opportunity to not only explore the meaning of Passchendaele and New Zealand’s role there, but also to put these events into today’s context, because they form a vital thread in our history to how New Zealand sees itself on the world stage today.

“It is only when we understand how Passchenaele helped form our identity we can better know and understand ourselves and who we are.”

She hopes the documentary will help give more prominence to the lives lost on the Western Front, and recognition, in particular, to the slaughter at Passchendaele.

“It is a part of our history too few know too little about.”

A ‘short’ version of the documentary has previewed during the touring exhibition, Passchendaele: The Belgians Have Not Forgotten.

The exhibition, Passchendaele: The Belgians Have Not Forgotten focuses on how memories of the New Zealanders efforts during the Battle of Passchendaele, more than 90 years ago, continue to occupy a place in the Belgian consciousness.

Around 15 thousand people have so far visited the exhibition during showings in Wellington, Christchurch, Dunedin, Featherston and Waiouru.

It ends its season in Auckland this month, opening on October 4th at Fort Takapuna, where many soldiers, including the Maori Pioneer Battalion, were in camp before heading off to represent our country.

The exhibition ends on November 15th.
.

Today, a few hours ago started the ceremonies and remembrance activities in Fort Takapuna with a very moving ceremony on the place where the 5,000 Commemorative Crosses will be placed.

There was a brief speech of thanks by Deputy Mayor Julia Parfitt to those attending and contributing sponsors, at 6.30 pm the Ceremony commences:
· Bugler sounds Alert
· Mihi & Waahi tapu
· Alan Bloemendal, Bugler
· Heta Tobin, Kaumatua
followed by a General Introduction , Welcome, explanation of the purpose of Ceremony and the poem “Poppy & Pohutukawa” by Chris Mullane
at 6.42 pm the MC invites cross installation that was done by community groups and individuals. Piper John Graham plays throughout
· NSCC & Community Board lead the way
· NSCC Parks staff & contractors supervise

ending at 07.15 with Closure & Farewell by Chris Mullane

at 07.25 there was a Blessing of the Fort in preparation for installing the Exhibition
by Heta Tobin

more news and pictures will follow in the next hours
- September 30, 2009 No comments: Links to this post 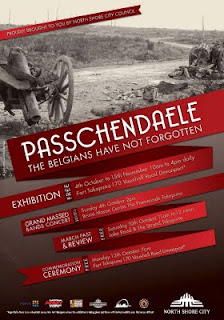 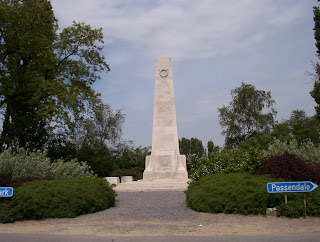 First Alderman Franky Bryon goes to Takapuna for the opening of the exhibition in North Shore City on the 4th of October. He will be there until the 12th of October.
So he will be there on the two most significant dates for the New Zealanders on the Western Front. The Battle of Broodseinde at 4 October 1917 what is known as the blackest day for the Germans in WWI. On that they the New Zealanders captured Gravenstafel (part of Passchendaele).
12 October 1917 is known as the first Battle of Passchendaele and was a massacre for New Zealand. They lost 2,700 fine young men in less then 4 hours.
Alderman Franky Bryon will represent the people of Zonnebeke/Passchendaele and the Memorial Museum Passchendaele 1917 on the commemorations in North Shore City.