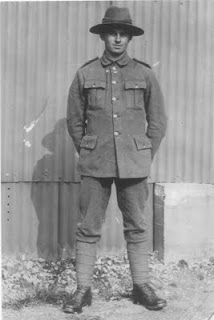 Lawrence Dart Brook was just 20 when he lost his life fighting in the Great War.

The young soldier was killed, along with 844 other New Zealanders, at Passchen-daele on New Zealand’s bloodiest day, October 12th, 1917.

He is one of 1176 New Zealanders with no known grave commemorated on the New Zealand Apse at Tyne Cot Memorial, the largest Commonwealth War Graves Commission cemetery on the Western Front.

Like so many other young lads, Lawrence had lied about his age to go to war.

One of his three brothers, Goff, had previously been away on an excursion and he had heard stories from him, which inspired him to enlist with his hometown regi-ment.

He would be killed in action along with 194 other men of the 1st Battalion, Otago Regiment, as the New Zealanders attempted to take Bellevue Spur – the Otago’s mown down as they led the first wave against at least eight German pillboxes, without adequate artillery support.

Lawrence’s father, George, never got over his death and wore a black tie in his memory until the day he too died. 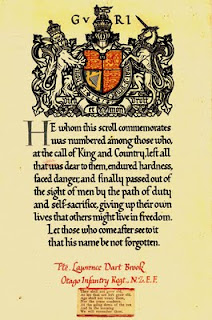 This Saturday, (August 8th) at 1pm, Lawrence’s nephew, Barry, is planning a poignant tribute to his uncle and his comrades who lost their lives during the con-flict.

Drawing on the family’s Scottish heritage, Barry Brook, will play a lament on his bagpipes outside the ANZAC Hall in Featherston where the touring exhibition Passchendaele: The Belgians Have Not Forgotten is currently showing.

The lament will include Amazing Grace and the Scottish Soldier.

Barry, who lives in Palmerston North, learnt the pipes when he was 13 and played with the Manawatu Scottish Society in 1944 for both VD and JDay celebrations.

“Playing the pipes is the highest mark of respect I can afford my uncle and all those other young boys who fought for our country,” he says.


The Brook family has carried Lawrence’s legacy through the generations.

Barry’s second name is Lawrence, one of his sons, David Lawrence, is named af-ter the young soldier, and the other son, “Andrew Milton” in recognition of the area down south where young Lawrence’s family first settled on their arrival in New Zea-land.

The Brook’s later establishing a homestead in Feilding when Lawrence’s father, a miller, was commissioned to run the Tui flourmill.

The exhibition: Passchendaele The Belgians Have Not Forgotten ends its season in Featherston on August 16th. Until then it remains open 10am-4pm daily.

From Featherston, the exhibition moves to the National Army Museum in Waiouru, where it opens on August 24th.


Note: Barry is planning to play his lament at 1pm on Saturday August 8th.

Or visit our blogsite – www.thebelgianshavenotforgotten.blogspot.com