More than three thousand people visited the exhibition Passchendaele-The Belgians Have Not Forgotten, during its Featherston season, three times the expected number.

Even more are expected to have viewed it through a special ‘web cam’ link allowing visitors around New Zealand, and also in Belgium, to log in for a look.

Telecom provided the necessary broadband link to the venue at no charge.
The Chairman of the Passchendaele Museum, Freddy Declerck was able to use the Internet link to personally thank all those who had played a part in the exhibition’s success. 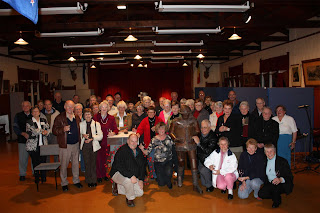 Speaking ‘live’ from his home in Belgium he told organisers, “Featherston was a must for us because of it’s historical significance in World War 1, but also because of the ANZAC Hall, (where the exhibition was held), - that building breathes history.
“We had expected maybe 1000 people might visit as Featherston is not a very big place, and to have three times that number, is a wonderful achievement for provincial New Zealand.
“I thank the volunteers who have worked hard to provide a wonderful experience. It is that passion and sense of ownership by the community that has made it so special.”

That passion was also evident among the hundreds of visitors, which included Barry Brook, whose uncle Lawrence Dart Brook, was killed at Passchendaele on October 12, 1917.

Barry, a piper since the age of 13, traveled from Palmerston North to play a lament for the fallen.

“Playing the pipes is the highest mark of respect I can afford my uncle and all those other young boys who fought for your country.”

DATES:
The exhbition will remain In Waiouru until September 27th, when it will be transported to Auckland.

Passchendaele:The Belgians Have Not Forgotten ends its New Zealand tour at Fort Takapuna where it will be on show from 4 October to 15 November.
- August 26, 2009