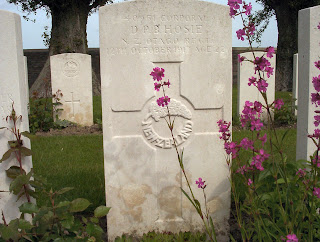 There are just over 2,500 names on Dunedin’s Roll of Honour.
The series of memorial banners records the names and details of all those who served and made the ultimate sacrifice in the wars of the twentieth century.
More than half (1545) of the soldiers named died during World War 1.
A number, including 22-year-old Corporal Donald Peter Brown Hosie, lost their lives at Passchendaele, on New Zealand’s bloodiest day, October 12th, 1917.
Before he enlisted, Hosie, of Kirkland Hill, Kaikorai, worked as an architect for the Dunedin firm of Edmund Anscombe and Associates.
Just prior to his conscription he had won a competition to design Wanganui’s new art gallery, the Sarjeant Gallery, and authorities agreed to a request by the then town mayor to defer his overseas posting until he had completed the working drawings.
Widely regarded as among the finest provincial examples in New Zealand, the gallery was opened by Prime Minister William Massey in September 1919.
It would be Hosie’s only work.
He died three weeks after the foundation stone was laid. He now lies buried at the Passchendaele New British Cemetery.
This month, (June 6 – May 7) the story of his sacrifice and that of his Otago mates will be commemorated with a special southern showing of the exhibition Passchendaele: The Belgians Have Not Forgotten, at the Otago Settlers Museum.
The exhibition, developed by the Memorial Museum Passchendaele 1917, is being brought to Dunedin by the Belgians as a mark of deep respect for the ‘southern men’ who gave so much – more in fact, Curator, Franky Bostyn says, than any other region in New Zealand.
Of the 2700 New Zealand casualties on October 12th 1917 during the First Battle of Passchendaele – 800 were from Otago of whom195 were killed.

“It was the Otago Regiment who led the first wave against at least eight German pillboxes, without adequate artillery support. As a result Bellevue Spur would become the graveyard for many of these brave young men.”
Less than two months later on December 3rd 1917, once again it was the Otago Regiment, who shoulder to shoulder with the Canterbury Regiment would be first in line for the attack on Polderhoek Chateau, where Sgt Henry Nicholas of 1st Canterbury would earn his Victoria Cross.
“These young men from Otago and Southland constantly, tragically and heroically, put themselves on the line. They were extremely good soldiers.”
Franky Bostyn believes it is also fitting the southernmost season of the exhibition will be hosted by the Otago Settlers Museum.
The Museum sits between the Dunedin Railway Station – a Passchendaele Memorial in its own right - and the Dunedin Cenotaph.
Passchendaele: The Belgians Have Not Forgotten opens at the Otago Settlers Museum, 31 Queens Gardens, Dunedin, on June 6 and runs through until July 5.
It can be viewed daily from 10am to 5pm. Admission is FREE.
The exhibition, Passchendaele:The Belgians Have Not Forgotten opened in Wellington in March and is currently in Christchurch.
It continues to stir emotions as it travels the country. Comments in the visitor’s book include:
'A very thought provoking display."
" A beautiful and dignified memorial...thank you."
"Special exhibition, helping our younger generation gain a little understanding of what our forefathers and fore mothers went through."
"A magnificent, powerful exhibition, wonderfully organised, in which facts were given great reverence by the sculptures as well as the photos - I am less ignorant than I was."
" A very moving tribute-the sculptures are truly beautiful."
" A sobering reminder of what my grandfather T Halstead(Jack) went through at Passchendaele.”
"A moving experience - thank you from a grateful generation."
" What our father never told us."
" A key factor in New Zealand's history that makes us who we are."“Thank you for bringing this exhibition to New Zealand. I could today pay tribute to my father’s eldest brother who died in France of wounds received at Passchendaele.”


Or visit our blogsite – http://www.thebelgianshavenotforgotten.blogspot.com/

The exhibition is supported by the Waimakariri-Zonnebeke Trust, formed following the official twinning of the two districts during the 90th commemorations of the Battle of Passchendaele to promote cultural, educational and business opportunities between the two.
- June 02, 2009