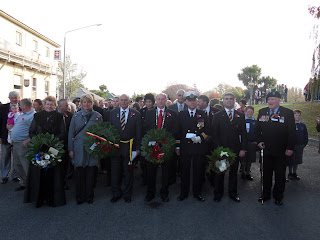 Jo picked up a splendidly uniformed Freddy (he had to get special permission to wear his uniform and looked amazing), Mayor Cardoen and Rita at 4.30 am….dark but surprising warm..into Christchurch for the Dawn Service….Over 10,000…..Mayor Ron Keating/Mayor Dirk Cardoen/Councillor Ingrid and Freddy matched with the wreath bearers. Michael Petterson marched with the flag bearers holding the Belgium flag and both Mayoress”s, Els, Lieve, Gavin and I marched with the rest. The exhibition was mentioned as was the invitation to attend after the service (we had requested it to be open at 7 am) 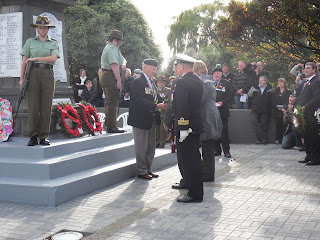 Lots of introductions made to the dignitaries, we then caught the special tram to the breakfast at the Christchurch RSA. It is a big venue, absolutely crowded. Again the opportunity to speak….Freddy presented a gift and used the opportunity to invite them all to the exhibition. He went to the officers club with Micheal and we ate and had a beer (something the delegation felt was quite strange) with the assembled community.
Then off to Kaiapoi for the march down the street…over 3000 in attendance. Mayor Cardoen gave a great speech that was interpreted by Freddy. Wreaths were laid including the poppy signed by the Zonnebeke primary school. At least 3 people in the public came to congratulate Mayor Cardoen for his speech in Flemish because they were of Dutch descendance and they heard their language for the first time during an official function.
Onto the Rangiora Parade…again a large crowd (over 3000) a longer march to the Town Hall, service and speeches in the Town Hall, then marching back to the cenotaph to lay the wreaths.
Back into Christchurch for the Anzac Remberence Concert. It will be very hard for me to describe the unbelievable impact this concert had on us all. 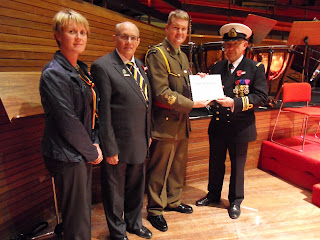 The concert was a combination of the Woolston Brass Band and the New Zealand Army Band. Michael Petterson has organised our attendance and had Freddy prepared to read the ode during the concert.
We were meet by the Music Director of the NZ Army Band Leanne who looked after us all. After the first half comprised of popular war time music and a general sing a long,we moved into a spellbinding second half. 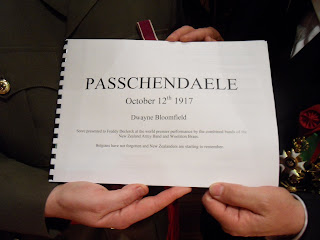 Dwayne Blooomfieds specially composed piece “Passchendaele 12 October 1917” was having its world premier. What transpired here was so very emotional,so powerful, so very personal - I cannot describe how it was. The tears that flowed ( from everyone) from this simply stunning piece of music befitting of its impact…….silence followed its conclusion, when Freddy arrived on stage to read the ode, followed by the last post, reveille and then the lowering of the flag……the crowds reaction ( 2000) of the impact of what they had just heard very significant. Freddy was then presented with the Music score and in his thankyou speech, replied the Belgium’s gift to New Zealand was the touring exhibition and invited them all to attend. He also mentioned the first Dawn service in Zonnebeke and the opening of the return exhibition.
We all went on stage to meet the band and to especially thank Dwayne for his professional musical brilliance in his music score.
It would be fair to say that when we all left...some of us still very emotional , it was a very quiet reflective drive back to Tuahiwi…where we visited the graves and to show the delegation the wreaths that had been laid on their behalf. Again a very moving experience.
A very tired delegation arrived at the dinner specially arranged by the delegation to thank their host families and some special invites. Again some very moving speeches, with Freddy capping off a very emotional day with his personal gift to Michael Petterson.
A very long day but one I think all of us will remember for a long time
It was interesting to note that the Prime Minister mentioned in his speech, the shared agreement and the exhibition…
- May 01, 2009