EXHIBITION HONOURS WAIMAKARIRI BOYS WHO LOST THEIR YOUTH AT PASSCHENDAELE 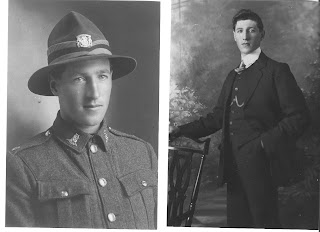 Private Stanley George Harding was one of twenty-one young men from the Waimakariri District who found themselves fighting against the odds for survival on October 12, 1917 – New Zealand’s bloodiest day.

In just four hours 2,700 New Zealanders were either killed or wounded as struggled to scale the heights of Bellevue spur.

Stanley Harding, the carpenter from Kaiapoi, would be among the 845 killed that day.

It appears as though he spent most of his last night negotiating his way through the dark and the damp to reach his forward support lines, where he would have waited in the rain for the dawn.

History tells us his own artillery shells would have fallen just behind him and then advanced over his trench.

He would have heard the Otago’s advance and then, a short while later and still in the darkness before sunrise, he would have advanced across the Ravebeek Stream and up the easy muddy slope to the first set of wire – which as we now also know remained uncut.

He was later seen lying on the slopes of Bellevue Spur, badly wounded in the lower abdomen and is today buried at Poelcapelle British Cemetery in Belgium.

It is young men, like Stan Harding, the touring exhibition Passchendaele: The Belgians Have Not Forgotten, which opens in Christchurch next week, has been designed to commemorate.

Developed by the Memorial Museum Passchendaele 1917, it focuses on how memories of New Zealand’s efforts during the devastating campaign, more than 90 years ago, continue to occupy a place in the Belgian consciousness.

Passchendaele Society President, Freddy Declerck (who will be in New Zealand for the Christchurch opening) says, the exhibition reflects on a very different landscape today, than the New Zealanders encountered in 1917.

“Today, this ground is quiet farmland, but it is also one of the most iconic and emotional places in your country’s past, and for those who cannot journey to Belgium, we feel it is our duty to bring at least an impression of Flanders Fields to you because nobody should ever forget what happened in and around Passchendaele and Messines and the sacrifice of the thousands of your brave men who came across to help us, for which we are eternally grateful.”

The exhibition Passchendaele: The Belgians Have Not Forgotten - opens at Our City O-Tautahi on April 21st after a successful six week season in Wellington.

It features photographs by award winning British photojournalist, Michael St. Maur Sheil, sculptures by Belgian artist Rik Ryon made from driving bands of shells, and relics from the battlefields themselves.

Freddy Declerck says the people of Belgium want to show New Zealanders how they care for the dead and how they remember everyday with their history.

“In the early years after the war, New Zealanders couldn’t afford to come to Belgium to commemorate your people, your people who are here under the graveyards, our graveyards and so it has been our duty to guard and commemorate them.

“Today, more and more ordinary people are thinking of an uncle, a great uncle, who they have not known and who they have heard stories about, that has come to Flanders battlefields. But where it is not possible for them to see it with their own eyes, they can never really know what happened here, where they have been, how they have suffered, what the mud was like and so on.”

“We are saying to you, we will take care of your dead, but you are always welcome here in Flanders. Come – travel in the footsteps of your ancestors. We would love to see you.”

A Belgian delegation, which includes the Mayor of Zonnebeke Dirk Cardoen and several aldermen, will attend the Christchurch opening during their visit to Waimakariri. (The two districts twinned during the 90th commemorations of The Battle of Passchendaele.)

A five minute excerpt from a soon to be released documentary “Our Bloodiest Day” will also premier at the Christchurch opening.

For more information and to arrange interviews with Freddy Declerck -