From Auckland to Wellington 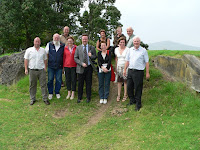 Monday evening dinner in Auckland ...food was superb, fresh fish for all, margaritas for Jo. The delegation then went up to the Auckland museum for a night time view of the city.
The hotel accommodation was excellent with lovely rooms and views of the city.
The rental van is also the right size because of the amount of baggage they all carry.
Early Tuesday,after a brown paper bag of breakfast consisting of very good pies and hot coffee (typical Kiwi breakfast) they set off for Rotorua on time! The trip through the country side punctured with photo stops. They arrived in Rotorua on time for a tour of Te Puni, the geyser was at it s best, boiling mud, wonderful bush, they saw a real kiwi and the Maori concert was very very good. When they sang Pokare kare ana some of the delegation were in heaven. Then they set off for Waiouru, stopping off at the wonderful Huka falls, this is a magnificent natural hydro system with the amazing power of the water gushing through rocks...
The lunch was at lake Taupo before going to Waiouru over the Desert Road.
They arrived only 6 minuted late for Waiouru...not bad considering the delegation always wanted to stop for photos and.....the weather had changed , it was now cold and wet and . The group was met by Sergeant Peach and settled into the officers mess.
Dinner was with Waiouru Camp Commander Roger MacIwaithe. A lovely formal meal with very good New Zealand wines.
Up early meet by Staff Sergeant Don who accompanied the group to breakfast. Great breakfast, packed and on time down to the Army Museum.
Surprise surprise meet by Chris Pugsley and his wife. He was in New Zealand holidaying and doing some filming for Maori TV. Professor Chris Pugsley is a friend of our Museum, he's a historian at Sandhurst and has written many books about New zealands involvement in WWI.
Th group could now visit the Army Museum. Colonel Ray Seymour and Windsor Jones, the curator welcomed the delegation for morning tea and Dep. Governor Gunter Pertry spoke and gifts were exchanged.
They left on time... stood at various scenic spots including the Rangitata golf club , where they allowed them to travel with there unique elevator down the terrace to get some shots of the river. After a sanitary stop at Otaki beach they finally arrived in windy Wellington.
Dinner was at the Belgian Beer Café , all had mussels although some had them grilled instead of a one kilo pot.
They will have a very busy schedule tomorrow but all is on track.
- March 11, 2009