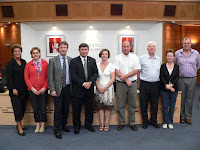 The delegation went over to Devenport where Helen Pollock escorted them around yesterday morning. Then all off to North Head, then Fort Takapuna for a visit and tour and then the stunning part of the day! A wonderful Mayoral reception at North Shore City...the Mayor and his councillors were very receptive to the proposal about the exhibition and they had their whole communication team in tow. They are excited about the whole project and it fits well with their heritage week starting 2 October. Fort Takapuna will be the place of the exhibition in Auckland. Fort Takapuna has an interesting link with World War I because in this time the nucleus of a camp was built at Fort Takapuna, as a training area for Maori and Cook Island reinforcements.
In 1918 the camp accommodated German prisoners of war and in 1919 was used as a hospital for flu victims. Hon Consul Iain McKenzie did a great part of the work to bring us in contact with all those involved in Auckland region, he has already put a tremendous amount of work into this. The delegation was invited for a dinner at the New Lynn Returned Service Association (RSA). MMP1917 curator, Franky Bostyn was giving a lecture in precence of Aucklands RSA President. They had a guided tour through the Auckland War Memorial the day before. In the mean time a film crew from Shanghai(China) is filming in the National War memorial in Wellington..millions and millions of Chinese will get to see the exhibition.
- March 09, 2009