Making the exhibition has started today in New Zealand

Today, Memorial Museum Passchendaele's curator Franky Bostyn arrived in Wellington to start making the exhibition in the Hall of Memories in the National War Memorial http://www.nationalwarmemorial.govt.nz/ He's very excited about the venue and we are all grateful to the curator Paul Riley who give us tremendous help in all the work that has to be done. Visit the website of the National War Memorial and read the section about the carillon to wee that there is another link between our two countries. Staf Nees has, amongst others played the carillon. He was former director of the Royal Carillon School 'Jef Denyn' and City Carillonist in Mechelen, Belgium.
The New Zealand Unknown Soldier has been brought home in 2004. On that occasion the party has been visiting Flanders' Battlefields before heading for New Zealand.
We do have more shared memories than we can imagine.
Also the New Zealand Army started with the transport from Auckland to Wellington today. All the items of the exhibition have been transported from Antwerp/Belgium to Auckland on a ship.
The panels have been printed and designed in New Zealand. This is one of the many things that could be arranged over the internet. Also, the flyers and newsletters are written, designed and printed in New Zealand. Lauren McKenzie, director of The Primrose Group is in charge of all this designing, printing and writing and is doing a great job for the exhibition.
- February 27, 2009 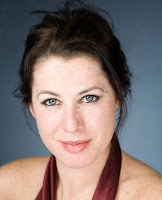 Carleen Ebbs is a young, award-winning lyric coloratura soprano from New Zealand who has recently completed a Masters of Vocal Studies with Distinction at the Guildhall School of Music and Drama in London after obtaining a Masters of Music at Victoria University of Wellington. In addition to tours in New Zealand she has recently performed with Opera de Bauge, France. She has sung solos in Mendelssohn's Elijah and Lauda Sion, Schubert's Mass in G, the Messiah, Vivaldi's Gloria and Judas Maccabaeus with choirs in New Zealand, England and Wales, and performs regularly in the UK, notably at the Bel Canto Opera Venue in London
- February 19, 2009

Falls the Shadow by Helen Pollock 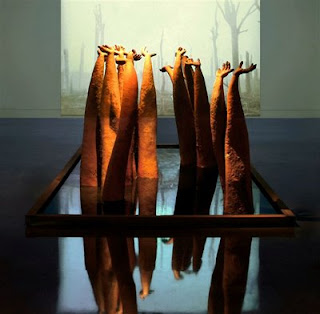 The beautiful art work, Falls the Shadow, made by ceramic artist Helen Pollock from Auckland (New Zealand) will be on display in the Memorial Museum Passchendaele 1917 in Zonnebeke, Belgium from April 25 till November 15. Helen Pollock has mixed New Zealand clay with clay brought from the battlefields of Passchendaele to create a grove of hands reaching up in a way that suggests aspiration and death against a background of trees stripped bare by the war. The Passchendaele clay comes exactly from the place where the soldiers had their last night rest before the attack on Belle Vue spur on 12 October 1917.Visitors will find it a fitting reminder of the futile death of young men in an unsurpassed disaster.

Falls The Shadow by Helen Pollock - Artist from Scott Ewing on Vimeo. 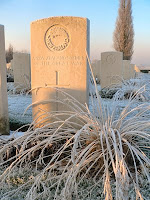 Bringing History Back to Life – Passchendaele Comes To New Zealand.

An exhibition commemorating the World War 1 sacrifice of New Zealand soldiers on Flanders fields will begin its New Zealand tour in Wellington in early March.

Called Passchendaele: the Belgians Have Not Forgotten, the exhibition features photographs, images and artefacts highlighting the memories of New Zealand that still live on in Flanders today.

The exhibition has been developed by the Memorial Museum Passchendaele 1917 and aims to bring the devastating battles for the Western Front, where losses far outweighed those at Gallipoli, back into the national conscience.

Of the 18,500 New Zealanders killed during the Great War, some 5,000 died fighting in Belgium (almost twice the death toll recorded at Gallipoli) and 13,000 others were wounded.
Passchendaele Society President Freddy Declerck says, “it is a very significant loss for New Zealand. 18,000 casualties from 100 thousand New Zealanders who served from a population of a little over one million. I think there is no original family who has nobody lost, not only at Gallipoli, but also Passchendaele.

“Passchendaele should be significant in your country also.”

In four hours time on one day alone, October 12, 1917, New Zealand forces suffered 2700 casualties, including 845 fatalities, trying to capture the Bellevue Heights on the outskirts of Passchendaele. They were slaughtered and had to be withdrawn. It took two days to clear the battlefield of bodies.

It remains our bloodiest day with the losses here, more than the combined total from the eruption of Mt Tarawera, the Hawkes Bay earthquake, Tangiwai rail disaster, sinking of the Wahine, and Erebus.
Passchendaele Museum Curator, Franky Bostyn says the people of Flanders and, more widely, the people of Belgium have never forgotten the New Zealand sacrifice.
“In 1917 your country left an important part of its history here in Flanders, not only the events, but also the men, the men are all here, a part of our land.
“90 years later we have what we have now – one of the most prosperous areas in Europe, rebuilt and with great economics – and it is thanks to these men who came here, voluntarily to fight for freedom. Our gratitude to them will last forever.”


Passchendaele: The Belgians Have Not Forgotten reverses the journey made by those soldiers from the “uttermost ends of the earth” bringing the Belgian memories of the New Zealand sacrifice to life through images, movies and artefacts.

It features photographs by award winning British photographer, Michael St. Maur Sheil, sculptures by Belgian artist Rik Ryon made from driving bands of shells, and relics from the battlefields themselves.

Freddy Declerck says we want to show New Zealanders how we care for the dead and how we remember and live everyday with their history.

“In the early years after the war, New Zealanders couldn’t afford to come to Belgium to commemorate your people, your people who are here under the graveyards, our graveyards and so it has been our duty to guard and commemorate them.
“Today, more and more ordinary people are thinking of an uncle, a great uncle, who they have not known and who they have heard stories about, that has come to Flanders battlefields. But where it is not possible for them to see it with their own eyes, they can never really know what happened here, where they have been, how they have suffered, what the mud was like and so on.

“We are saying to you, we will take care of your dead, but you are always welcome here in Flanders. Come – travel in the footsteps of your ancestors. We would love to see you.”

The exhibition will tour six centres, opening at the Hall of Memories at the National War Memorial in Buckle Street in Wellington on March 6th, 2009.

From there it will move to Christchurch, Dunedin, Featherston, Waiouru and Auckland.

The New Zealand Army is managing all the logistics and transportation throughout New Zealand. 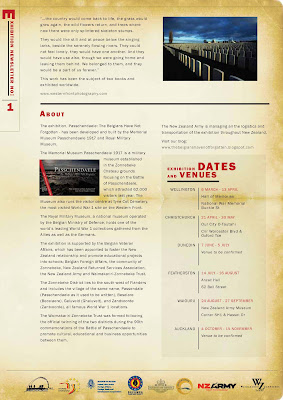 First newsletter is out, page 1 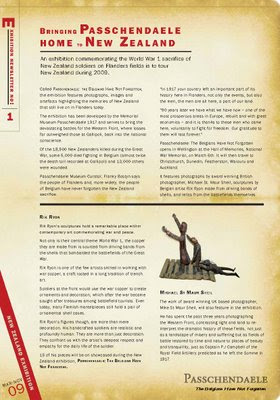