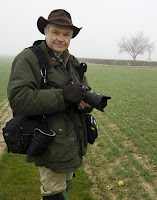 The work of Michael St Maur Sheil is part of the exhibition.
Mike St Maur Sheil has a been working as a UK based photographer since 1970 when he began his career covering "the Troubles" in Northern Ireland. Here he became associated with the New York picture agency, Black Star and since then he has worked in over 60 countries around the world, working for a wide range of corporate and industrial clients. In 2002 he was received a World Press Photo award for his work on Child Trafficking in west Africa.
For the past three years, he has been photographing the Western Front, using the contrasting elements of light and land to re-interpret the dramatic history of these fields, not just as a landscape of misery and suffering but as fields of battle which have been restored by time and nature to places of beauty and tranquillity just as Capt P J Campbell, Royal Field Artillery, predicted they would as he left the Somme in 1917
“...the country would come back to life, the grass would grow again, the wild flowers return, and trees where now there were only splintered skeleton stumps.
They would lie still and at peace below the singing larks, beside the serenely flowing rivers. They could not feel lonely, they would have one another. And they would have us also, though we were going home and leaving them behind. We belonged to them, and they would be a part of us for ever.”
This work has now been the subject of two books and exhibited world wide. He is now a qualified member oif the International Guild of Battlefield Guides and his work can be seen at http://www.westernfrontphotography.com/
- January 27, 2009